Film Review - He Was A Quiet Man 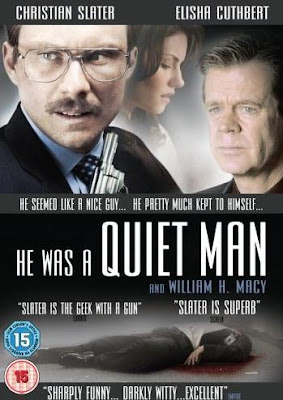 “You may ask why I did what I did. But what choice did you give me? How else could I get your attention? All I wanted to do is exist in your world. Just one person, would take time to actually see me. Help me find a way out.” Bob Maconel.

Bob (Christian Slater) was a quiet man, the office geek, the anonymous cube dwelling loser who nursed a deathwish about his work colleagues. This is the guy who sits across the street from this skyscraping workplace and fantasises about it blowing up, who actually carries a gun to work in his lunchbox with a view to blow a good number of his fellow workers away (egged on by his psychotic goldfish).

Welcome to a kind of Fightclub part 2, a world without rules, a frantic rollercoaster into the mind of a demented worker drone… Surreal and unnerving in equal measure, He Was A Quiet Man is a fantastic, amusing, satire / romance / thriller which digs under the calm surface tension of workplace bullying and wish fulfilment random violence leading to redemption. I mean who hasn’t at some point thought about blowing their co-workers away in a blaze of hot lead? Oh, you hadn’t, um, yeah well, it’s just a turn of phrase… Like when Bob says:

“There comes a time when the diseased and the weak must be sacrificed to save the herd.”

Slater is excellent here sporting an un-fetching receding hairline, chronic porno star moustache and a convincing clammy demeanour. He wants to be loved but he hasn’t got a chance with the pneumatic hotties in his office, especially as his male co-workers are loud, contemptible scumbags. One day the bald freako in the next booth beats Bob to the punch and starts to massacre everyone in the office. Bob is saved ironically because he was bending over to pick up a dropped bullet, and when he stands up is able to blow the killer away thus becoming an immediate hero. Suddenly Bob’s promoted to the role of Vice President for Creative Thinking, given a company car and executive privileges, life turns around so fast and so completely that it just might tip him over the edge. Also as a result of his hero status Bob gets to know Vanessa (Elisha Cuthbert) who took a bullet in the spine and is left paralysed, he steps up to become her new boyfriend / carer and things will never be the same for either of them…

The cinematography is superb, the flashes of surrealism are well judged and overall this is reality check for those who think Dilbert cartoons aren’t based in reality.

Even if you don’t think this sounds like your cup of tea, you should really check out the trailer for this mind blowing, challenging and altogether excellent movie… It’s a masterpiece and features some fantastic music – especially Robert Cosio’s ‘For You’… track it down here on my myspace page if you get chance.

He Was A Quiet Man is an odd film and certainly won’t be for everyone. But for me its gate crashed my top twenty films of all time and if you know the kind of stuff I like (Pi, Fight Club, The Crow, Die Hard, True Romance, Dark City, The Matrix etc) and think along the same lines then seeing this film should be the next thing you do!! 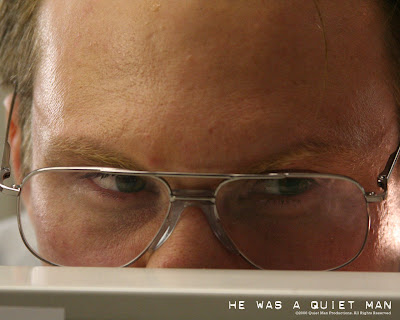 Email ThisBlogThis!Share to TwitterShare to FacebookShare to Pinterest
Labels: Christian Slater, he was a quiet man, tasty film