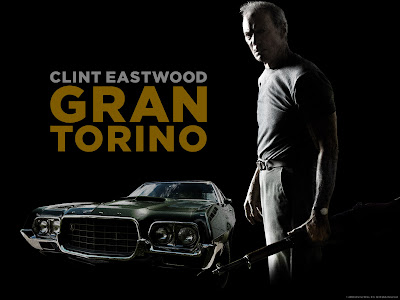 Do you feel lucky? Huh? Go ahead…make my day. Nobody does iconic banter like Clint Eastwood and now here he is at almost eighty still cracking quotable lines like “Ever notice how you come across somebody once in a while you shouldn't have f**ked with? That's me.”
Gran Torino sees Eastwood direct himself in the role of Walt Kowalski, an all American antihero (at heart) battling gangs, immigrants and the well meaning attentions from his local priest. Kowalski is a bitter widower carrying masses of guilt from his time in the Korean War, he can’t relate to his spoilt grown up children and can’t stand the way that his formerly white neighbourhood is being taken over by ‘gooks’.
This is a guy who is wound so tightly that you just know that he will snap before the end credits – what isn’t apparent is the form his unleashing of frustration will take. When Walt catches his new neighbour Thao (a rough and ready turn from the young Bee Vang) attempting to steal his beloved '72 Gran Torino, things take an unexpected turn and neither of their lives will be the same.
Acting wise Clint takes centre stage and burns the screen with his formidable presence, the supporting cast do their best including a memorable turn from Christopher Carley as the rookie priest who is seeking to help him work through his issues. As well as the deeper life questions, there are laugh out loud moments aplenty when John Carroll Lynch pops up as the local barber with whom Walt has a monthly hair cut / mutual abuse session.
You probably won’t see a less politically correct movie this year, every other line is going to be offensive to someone – but Kowalski is more than just Alf Garnett with a rifle. Gran Turino has real heart and emotional depth, packing a compelling mix of violence, comedy and heart breaking drama.
The tension builds well up to a climactic showdown – where the former Dirty Harry takes on the gang that is wrecking the lives of Thao’s family and threatening to derail his future. As a director and actor Eastwood takes us on a powerful journey that stays just the right side of schmaltz. If he makes no more movies after this he’ll have signed off in fine style.

Quote: "I'll blow a hole in your face then go inside and sleep like a baby. "
Posted by Matt Adcock at 9:11 pm

Email ThisBlogThis!Share to TwitterShare to FacebookShare to Pinterest
Labels: Clint Eastwood, Gooks, Gran Torino, someone you shouldn't have f**ked with

As we know, lots of warhammer players are Chinese, Chinese guy make many records aboutrunescape gold.Do you want to know how they did it success?They

find the less challenging form of the game boring.runescape goldsomeinteresting ways to play with the

see - that's what I like... relevant and to the point feedback on my reviews!!

Thanks for the review, planning to go see this soon. Looking forward to it!

Saw this yesterday and was blown away!! Best film of 2009 so far....no-one does it better than Mr Eastwood!!