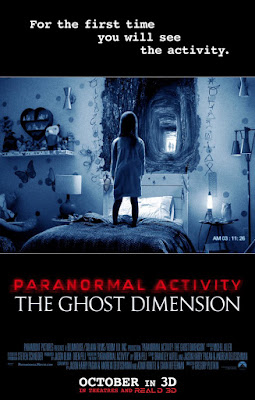 Here we go again then, maybe for the last time, with another entry in the long running hand held footage spook-em-up franchise. Dare you enter The Ghost Dimension? Well – it depends on what you’re looking for I guess. 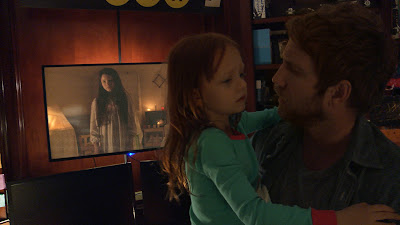 The first three Paranormal Activity films still stand as a decently scary trilogy, alas then came the awful part four and the odd spinoff The Marked Ones and now The Ghost Dimension which is reportedly the final one.

This time a new family, The Fleeges, made up of dad Ryan (Chris J. Murray), mum Emily (Brit Shaw) and their young daughter Leila (Ivy George) find themselves on the business end of the ‘activity’. Seems their new house – which comes complete with an ‘80s video camera that can see ghosts and a box of VHS tapes which depict freaky stuff circa Paranormal Activity Part 3 (you know back when it was still scary), is haunted!? 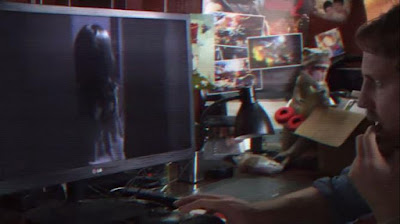 "not sure what I'm looking at here"

Doesn’t take long before things are going ‘bump’ in the night and young Leila is talking to an invisible friend who is getting her to burn the family bible and bury her mum’s rosary. The thing is – rather than being at a loss as to what’s going on as before, this time the parents can actually see the darn demon on tape – and it looks a lot like Venom from Sam Rami’s Spiderman 3 in case you were wondering…

Being able to see the ghostly baddie really lessens the scare factor and makes you wonder why they don’t just get the hell out of there. As a parent (and a Christian) if I caught sight of an actual demonic entity standing over my sleeping child’s bed, we’re be off pretty quick. But not the Fleeges who stay and ponder what to do, eventually calling in a priest - Father Todd but still leave little Leila on her own at night, which just isn’t a smart move. 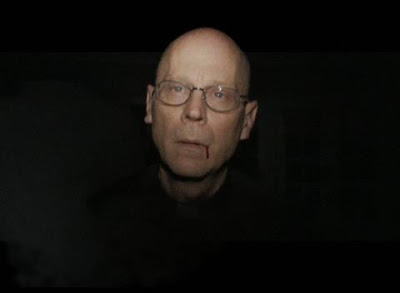 By the end some of the wider plot questions from the whole series have been tied up but even then the backstory starts to feel very cobbled together and unsatisfying.

So even though the franchise goes out with this paranormal whimper… And since when did you need to to pay extra for 3D when it's a found footage movie?? It really is time to stop.

Laughs öö – starts off with some bro humour