Matt Loves Like He's Bleeding Out with Stephen J. Golds 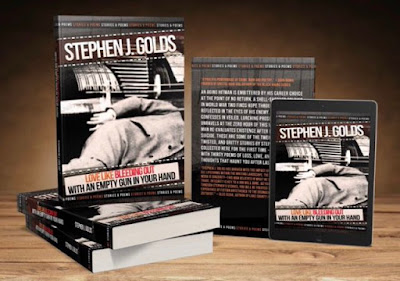 As his latest 'Love Like Bleeding Out with an Empty Gun in Your Hand' is about to hit retail - novelist Stephen R. Golds faces the Darkmatters 10 Interview Questions from @Cleric20:

Matt: If scientists ever managed to create a giant mecha version of you – who or what would be your nemesis?
Stephen: My arch-Nemesis would be a crawling, clawing personification of my own self-doubts and frailties.
Matt: What is the most disturbing fictional scene you’ve ever read or watched in a book/film of any genre?
Stephen: It would probably be the whole recent remake of Ghostbusters. They really butchered a classic. It was like watching your childhood pet being slowly kicked to death by a grinning idiot.
Matt: If you were hired to throw a parade of any scale or theme through the centre of London what type of parade would it be?
Stephen: It would be a black parade. A funeral march. Everyone dressed in dark colors. Mourning their own failures and regrets as the ugly jeering crowds throw rotting fruit. I would lead the procession, of course.
Matt: You’re in a strange town with £100,000 that you have to spend in a single evening – talk me through what you get up to…
Stephen: This is easy. Bars and clubs. Drinks for all. The money would spend itself and I would have friends until the cash ran out.
Matt: Who inspires you most (can be living or dead)?
Stephen: Tank Man aka Wang Weilin. On his way home from work, only shopping bags in his hands, he stood in front of the tanks in Tiananmen Square and wasn’t posing for photographs for Instagram either. That’s some real selfless, ballsy bravery.
Matt: There’s a masked assailant with a gun to your head, who is most likely to be under the mask?
Stephen: Probably an ex-girlfriend. And I’d be flattered.
Matt: What is the meaning of life?
Stephen: Charles Bukowski said it best. “Find what you love and let it kill you.”
Matt: What was the best gift you’ve ever been given?
Stephen: My children because they gave my life real meaning when I had never had real meaning before.
Matt: If you could have a sidekick robot – what would it be able to do for you?
Stephen: Assassinate and disappear people who blow their noses in restaurants.
Matt: What would you like written on your tombstone?
Stephen:  “I tried, god dammit. At least I did that.”
Any final words you like to add...
Stephen: If you like the noir or dirty realism genres please check out my novels and poetry.
- Always the Dead
- Say Goodbye When I’m Gone
- Poems for Ghosts in Empty Tenement Windows I Thought I Saw Once
-  Love Like Bleeding Out with an Empty Gun in Your Hand 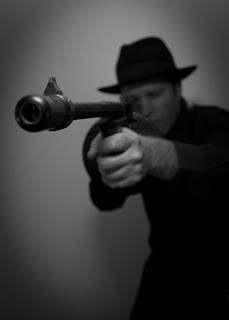 Speaking of 'Love Like Bleeding Out...' I've just had the privilege of reading an advance copy of this noir-em-up mixture of dark, twisted, and gritty stories, backed up with some kick-ass poetry!? Respect to
They feature a rum bunch of characters who include an aging hitman - embittered by his career choice at the point of no return. A shell-shocked soldier in World War Two finds hope through death, reflected in the eyes of his enemy. A serial killer confesses in veiled, lurching prose. A mobster unravels as he's about to be whacked. A man reevaluates existence after discovering a suicide. My favourites were the narrative reflections of bad men looking back on their lives of evil deeds and how they come across as real people, not fictional creations made to fulfil plot devices.
Whilst the subject matter might not sound like a lot of fun, I really enjoyed Gold's way with hard-boiled dialogue and his excellently readable Bukowski-like matter-of-fact presentation. In any anthology like this - some of the tales and poems are much stronger than others, but across the many short snippets of lives lived. loves lost and regrets felt there are some stone-cold classics which will stay with you.
This Stephen J. Golds is the future of crime and punishment fiction - you heard it here first...
Highly recommend grabbing a copy when it hits on 30 April '21!

SAMPLE IT, LOOP IT, EAT IT and LINK IT:

Preorder / Buy your copy of Love Like Bleeding Out HERE