Writing alone may not be enough…
Matt Adcock (@cleric20)
I get asked a lot about my philosophy regarding book promotion – especially by other authors.
Having worked in marketing and communications for over 25 years it sometimes feels like I’ve been training to market my writing all my working life!? I have to admit that there wasn’t much on book promo in my creative writing degree at university but I have picked up a few things – mostly by asking the question ‘what would appeal to me’? and then finding ways to act on those thoughts.
When I got the publishing deal for Complete Darkness I got the chance to think of some ways to drum up pre-orders. Having a few artist types who I know – I sent them the manuscript and cheekily asked if they’d create a piece of art of one of the characters – which I’d get printed on promo cards that I could give out at events. This strategy paid off with some great art coming in and allowed me to approach events such as FrightFest London, ComicCon Scotland, Stars of Time etc who all agreed to distribute the art cards to their delegates in the show’s goodie bags. 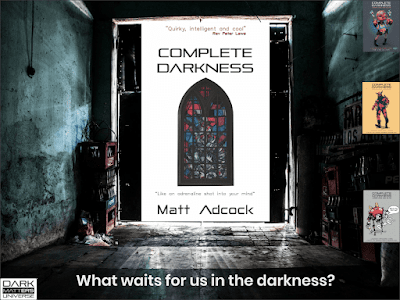 Having the cards as assets to offer allowed me to be confident in approaching events - I got in touch with the organisers of TitanCon in Belfast who asked if, alongside the card promo, I’d like to do a reading on stage there – what I didn’t realise was that the event also had George R.R. Martin reading!?
On the day before I nervously read my first chapter my amazon presales rank was 6,550,000th in the world. The next day I’d jumped 6,549,125 places and sat at 875th.
As the launch approached I managed to top some of the specialist Amazon charts and so finally on day one over 300 copies were sold. In October 2019 the book was unleashed on the world and I arranged a launch event. As my book deals with the topic of mapping ‘Hell’ I invited and Vicar and Satanist to a London pub, sold tickets and put on wine and chips (fries if you’re a US reader). 35 people paid £10 and that gave me the budget to give each a signed copy of the book as well as some free drinks etc. The event got some national specialist press coverage and led to a journalist reviewing the book. They picked Complete Darkness as one of the ‘Top Books of the Year’ for the UK Den of Geek site alongside new books from Philip Pullman and Margaret Atwood – it was a huge credibility boost. Think it's still live so have a look: DEN OF GEEK'S TOP BOOKS OF YEAR
Since launch interacting with readers and being available is part of the author promo I enjoy. I’ve guest-hosted a writing radio show, been interviewed on lots of podcasts and spoken on panels at events. 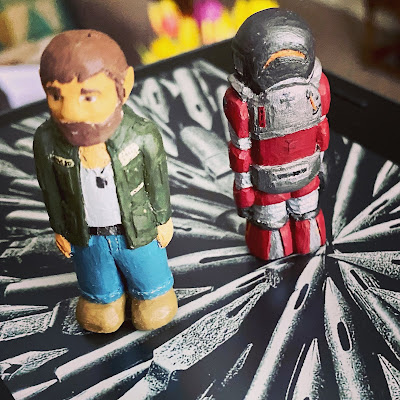 One of my favourite things that has happened was when a reader took the time to make and paint figures of my two main characters – they now sit on my shelf and make me grin every time I see them. It’s been a wild ride since then and a second novel is on the way along with several short stories published in various anthologies.
Now my excitement levels are maxing out because Complete Darkness has become a comic too. My dark near-future story was developed into a comic format during the lockdown with artwork by Northern Irish artist Karl Brown. As a comic book fan, I'm beyond delighted to have the chance to now launch my own. Comics are an art form that are becoming more appreciated by the mainstream, with many of them becoming Netflix / Amazon series too so who knows where this might lead? It’s been scary launching the comic through Kickstarter as it’s very public if you fail but fortunately, we have fully funded the comic and made the stretch goal of getting a 2000AD Judge Dredd artist to create a limited alternate cover too (see below)!? 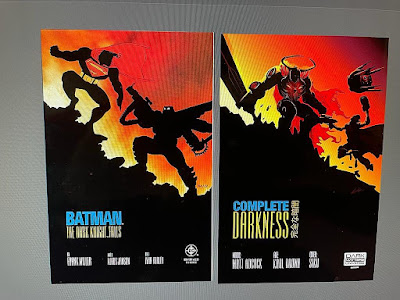 The inspiration (left) - the alt cover (right)
Creating the merchandise folk have pre-paid on the Kickstarter for, like t-shirts, snood bandanas and new art cards for the backers has been fun – some have even taken the chance to have themselves immortalised by being drawn into issue two as a cameo character…
The other great thing about the comic is that it introduced the novel to new readers with 42 of the backers buying the book alongside the comic. You can grab a copy of comic HERE
Thanks for reading (literally)...
Make someone happy (me) - check out my novel - click this banner...