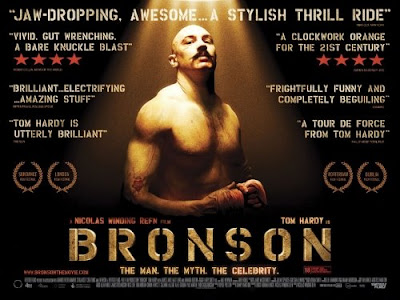 We go now live to HMP Wakefield, where Charles ‘Britain’s most notorious prisoner’ Bronson himself has recorded a message for those thinking of viewing this biopic of his life: "I'm proud of this film, because if I drop dead tonight, then I live on. I make no bones about it, I really was... a horrible, violent, nasty man. I'm not proud of it, but I'm not ashamed of it either... See you at the Oscars."

Bronson tells the unhappy tale of Charles Bronson (born Michael Gordon Peterson), who is potentially Luton’s most famous prodigal son, still residing at Her Majesty’s pleasure. Director Refn unleashes this ferocious, crunchingly violent drama like a double barrel shotgun blast to the face. Tom Hardy is amazing in the lead performance – capturing the crackling energy of the man who was locked away in 1974 aged only 21, for an armed robbery which saw him get away with the sum total of just £26.18. Once on the inside however it seems that Bronson found his vocation for violent misconduct, if you could get a City & Guilds in ‘wounding with intent’, he’d have bagged his NVQ in no time. The original seven year sentence was repeatedly extended for crimes committed in prison which included hostage-taking, staging rooftop protests and causing untold violent chaos.

The big screen depiction of ‘the man, the myth, the celebrity’, that Bronson has come to be known as largely thanks to the tabloid press, injects some pleasing Clockwork Orange references and a compelling docu-drama style. Bronson is portrayed here as a misunderstood man who has deep principles, but also severe sociopathic tendencies. One minute he’s a laughing and joking showman, the next he fixes the audience with a dead eyed stare of utter menace…

As prison dramas go Bronson is definitely a cut above the average fare, and whilst many will get off on the violent scenes, there is much here to ponder. Is the prison system actually to blame for exacerbating his negative behaviour? Could it be that being institutionalised and then confined to solitary incarceration for the majority of his ‘record breaking’ sentence might have actually given him cause for some additional violent tendencies?

The release of this film is timely given that Bronson’s latest parole hearing was scheduled to take place last week. He might have missed the Oscars this year but there’s no way of knowing what sort of spectacle he could cause there next year if he does get released!
Arbitrary Darkmatters final rating of: öööööööö (8 - Strong stuff)
Darkmatters quick reference guide:
Action 7,
Style 8,
Babes 6,
Comedy 7,
Spiritual Enlightenment 6
check out this good review of the film over at TWITCH
they came up with the ultimate sign off line:
"Now if only they can get the real Charlie Bronson to do a commentary track on the DVD"
Posted by Matt Adcock at 11:14 pm

Oh I wish I hadn't missed this at the GIFF, it looks a good film with a great performance from Tom Hardy, who I think is going from strength to strength and being really clever about the roles he picks - cage fighter next?!

Thanks for the review Matt.

Where did this guy, Tom Hardy, come from? i love it when actors find their break out roles like he did with Bronson