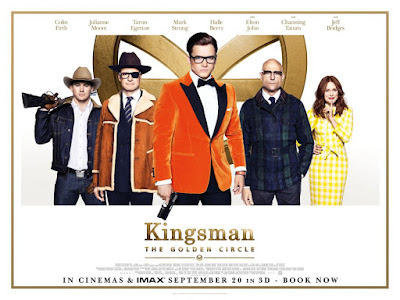 Read the newspaper version of this review: The Guardian

“My name is Poppy Adams, CEO of the Golden Circle. We engage in an aggressive business strategy… our world leaders have let us all down, so we are coming out of the shadows and taking over. And to make sure no one gets in our way... Kingsman is crumpets – as in ‘toast’ but more British!””

Here it is then, the kick ass sequel to the stylish hyperkinetic action spy-em-up Kingsman: The Secret Service. Leaping from the mind of comic book genius Mark Millar, the oh-so-British super spies are back to save the world and look very dapper whilst they do.

From the jaw dropping opening – a full on action car chase through the streets of London at night - through to the insanely ultraviolent and suitably over the top climactic showdown, this is an action flick that really delivers. 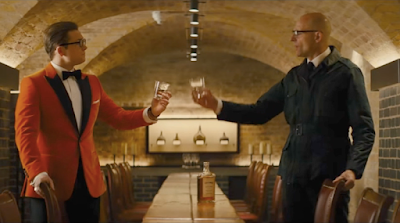 With their headquarters destroyed and the world held hostage by new big baddie Poppy Adams (the excellent Julianne Moore), whose HR selection process is to make her team kill, then eat, one of their friends, the remaining Kingsman agents call on their US counterparts the ‘Statesman’.

So we have Kingsman Quartermaster Merlin (Mark Strong), and if you’ve seen a poster or trailer it’s not a spoiler to let you know that the superb Harry (Colin Firth) is also back.

Also in the mix is Eggsy’s Royal girlfriend Princess Tilde (Hanna Alström) and her potential love rival Clara (Poppy Delevingne) who gets a questionably tasteless Glastonbury Festival scene. And then there’s Sir Elton John who plays himself and manages to be an absolute boss, stealing all his scenes.

Sure, if you’re easily offended by bad language, macho bravado or crunching violence, this isn’t the film for you. But for a balls out, feel good adrenalin overload The Golden Circle out ‘Bond’s’ James Bond at his own game and is more fun than all the Bourne films put together. The Kingsman franchise is the new golden (circle) standard for action spy adventures and sets the bar for all future efforts.

Horror ööö – Gets grim in places and violent throughout 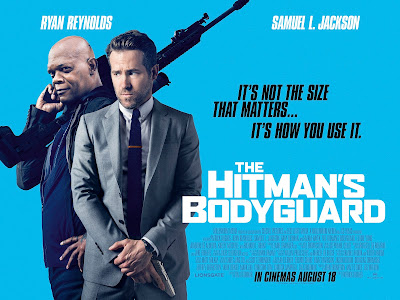 Read the newspaper version of this review: Buckingham & Winslow Advertiser

Generic buddy action comedies don't often come with such a strong cast – and The Hitman’s Bodyguard brings some A-game likeable heroes with Ryan ‘Deadpool’ Reynolds (who is the titular bodyguard) and Samuel L. ‘Kong: Skull Island’ Jackson (as the hitman)…

Alas that is all Patrick ‘Expendables 3’ Hughes has going for him as despite the fun foul-mouthed banter of the two leads, The Hitman’s Bodyguard is just not a great film in any way.

So we have Michael Bryce (Reynolds), a once AAA rated security provider to the rich and powerful. His career gets nuked when he loses a high-profile client and is consigned to looking after coked out lawyers such as Seifert (a fun but brief cameo from Richard E. Grant).

Meanwhile evil President of Belarus, Vladislav Dukhovich (Gary ‘Child 44’ Oldman) is busy committing genocide and killing off all witnesses who might testify against him. Except that is for ultra hitman Darius Kincaid (Jackson), who has dirt on Dukhovich and thus needs to be protected en-route to give evidence at The Hague, from Manchester in the UK. 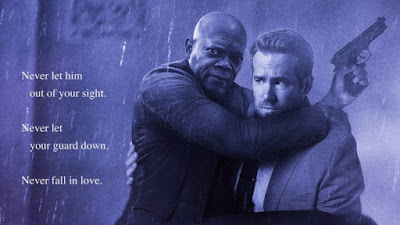 Cue some mildly entertaining but ‘seen it all before’ assassination attempts, car chases and lots of banter. One of the problems is the low rent setting for the first major action scene. The streets of Coventry are just really hard to make look cool even when you have a small army of tooled up mercs trying to kill Kincaid. It looks for all the world like one of them might pop in a Tesco Express and grab a sandwich mid battle… 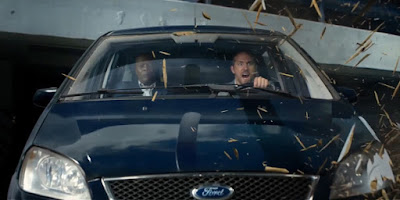 "not a test drive"

As the predictable plot ticks along, there are love interests on hand in the form of Bryce’s ex-lover Amelia (the excellent Elodie ‘Elektra from Netflix’s Dare Devil’ Yung), a C.I.A. agent who blackmails him into protecting Kincaid in the first place. Speaking of whom, Kincaid’s wife Sonia (Salma ‘Savages’ Hayek) is locked up and is being used to persuade him to testify in order for her to be released. 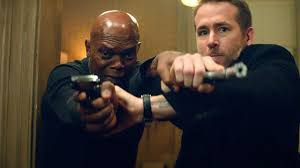 There is one funny flashback of how Mr and Mrs Kincaid met but otherwise it's a case of lazy swearing rather than actually funny lines. Couple this with action which wouldn’t look out of place in a bargain bin DVD and this is massive missed opportunity.


The Hitman’s Bodyguard is averagely entertaining, it’s not rubbish but it could and with the cast it has, should, have been so much better!

(2.5 - Average fun and action that should have been better)