Matt faces God in the Machine (review) and Cole Martyn 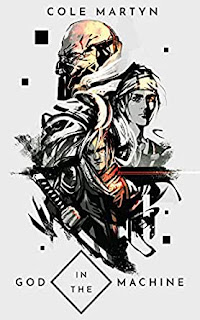 Reviewed by Matt Adcock (@Cleric20)
Meet young are Elias and his even younger brother, who are Ronin class citizens – not actually wandering samurai without masters but just poor decent folks – but there just might be some foreshadowing in the nomenclature…
They exist in the wildlands outside the super community of the Citadel where the baddie rulers are in complete control. Yes, so far so much of a well-worn trope in which to tell a cyberpunky dystopian tale of a foretold hero who might just be the hope of the populace to overthrow the fascist-lite dictator who isn’t adverse to some ethnic cleansing on the weekends.
Martyn is certainly mainlining pop-culture sci-fi and warrior films drawing from a myriad of (excellent) sources not least Ghost in the Shell, Star Wars, Avatar, Transformers, The Matrix etc but also some martial art fantasies like Crouching Tiger Hidden Dragon and a personal fav House of Flying Daggers. There’s maybe a little Kung Fu Panda in there too and I mean that as a compliment! 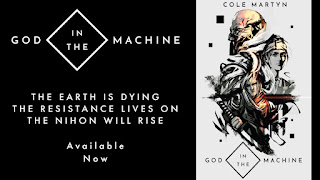 Along the way there are hero training montages thanks to Shimada an exiled Jedi master-esque warrior who gets ‘Nihon’ Elias started on the basics of combat and then hands him over to Grand Maester Martell – the Sage of Albion (who likes to be called ‘Bumble’). Cue 'Eye of the Tiger' on the soundtrack as Elias becomes all he was meant to be… but maybe not through the ‘traditional’ route thanks to the man-beast genetic experiment Maximus – who is one of the most fun characters – I pictured Max as kind of Aslan-meets-Chewbacca!?
Anyway, the future Tory-like government led by Autarch Vicentine who rule over their collapsing planetary ecosystem – mostly by indulging the rich with extended life thanks to forcibly extracting the plasma of the poor - whilst pretending the climate disaster isn’t happening doesn’t sound so far-fetched alas. What we have here then is a pretty classic storyline spiced up with enough cyber tech props, a great AI’s alt-history and plenty of action in the forms of fights, shootouts etc to make God in the Machine very worthwhile seeking out!
And if you like this, the good news is that there are more tales from the same universe with the short stories: Icarus, Hades and Nihon available to buy and a sequel on the way too. I will certainly be checking them soon.
In the meantime – I had the chance to ask Cole some Q’s:
Matt: If scientists ever managed to create a giant mecha version of you – who or what would be your nemesis?
Cole: Great question, I'm still hoping that scientists creating a giant mecha version of me is a possibility. But if they also created a nemesis it would probably look like a mixture of Trypticon from Transformers and the Dragonzord from Power Rangers. I'm probably benchmarking my age here. Not sure why my nemesis is a giant T-Rex or what that symbolizes, but that's what is in my mind.
Matt: What is the most disturbing fictional scene you’ve ever read or watched in a book/film of any genre?
Cole: One scene that really struck me recently was in Paul Auster's City of Glass, when the main protagonist Danial Quinn (pretending to be a Private Investigator named Paul Auster), interviews a deranged young man named Peter Stillman (Junior) who was imprisoned for nearly a decade by his father. It was brilliantly written and really quite unsettling.

Matt: If you were hired to throw a parade of any scale or theme through the centre of London what type of parade would it be?
Cole: It would be a massive science fiction parade celebrating all things geeky. Star Wars, Transformers, Dune, Gundam, they'd all have massive NYC Thanks Giving Day style inflatables. Imagine the end of Jingle All The Way with Mechs and you get an idea of what I'm envisioning.
Matt: You’re in a strange town with £100,000 that you have to spend in a single evening – talk me through what you get up to… Well, this could get messy. I'd like to imagine myself having a debaucherously crazy night on the town akin to the Hangover, but in reality, I'd probably end up trying to find the nearest Tesla dealership to finally buy my Model X!
Matt: Who inspires you most (can be living or dead)?
Cole: George Lucas has been a huge influence on me. Star Wars gripped me as a child and has never let go (even in the Disney era!). I know Lucas has his faults and people were disappointed with his Prequel trilogy but I had huge admiration for him as an artist, as someone who loved his work so much, he spent the best part of his career working on it. I take inspiration from people who genuinely believe in their creations and are willing to go to incredible lengths to see what's in their imagination come to fruition. Lucas was the epitome of this, he revolutionised the way films are made in order achieve his vision.
Matt:  There’s a masked assailant with a gun to your head, who is most likely to be under the mask?
Cole: Probably whoever created that giant mecha dinosaur I've been fighting. As far as I'm aware, nobody is currently trying to kill me.
Matt: What is the meaning of life?
Cole: For me, life has always been about trying to improve yourself. It is a lifelong journey of knowledge and exploration. Hopefully, you can achieve a little good along your way and make the world a better place for someone else. My aim in life is to pass on what I've learned to my children and hope they avoid some of the mistakes I made along the way.
Matt: What was the best gift you’ve ever been given?
Cole: I received an Optimus Prime when I was about 6 years old, I had an older brother and inherited most of his old battered Transformers but this was the first one of my own. I remember having to travel to a Toys'R'Us in a different city to pick up the last one in stock, it was during those times when it was a must-have toy so I was over the moon when we managed to get hold of one. I've still got it and recently passed it on to my son who has now become a massive Transformers fan himself.
Matt: If you could have a sidekick robot – what would it be able to do for you?
Cole: I'd quite like an R2-D2 style sidekick, who could drive my car, answer my phone, edit my manuscripts!
Matt: What would you like written on your tombstone?
Cole: I'm hoping that Jeff Bezos would have found a way around death before I need to go shopping for a tombstone. If humanity hasn't cheated death by then, I'd probably go for something about being an amazing dad, wonderful husband and best-selling author.
Matt: Any final words you like to add...
Cole: Thanks again for your support of God in the Machine, I really appreciate you taking the time to read it. Also, I wanted to pass on my congratulations again on your comic, it is truly fantastic and has made me very jealous. It must have been a fantastic feeling to get it in your hand and the reception online has been fantastic.
Out of a potential 5 - you have to go with a Darkmatters:

Buy your copy of God in the Machine here