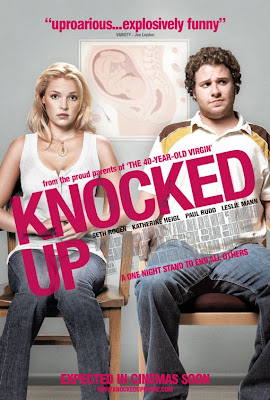 Hi my name’s Ben, I’m a chubby slacker with no prospects but I’m out for the night and through drink haze I meet you – a stunning blonde out celebrating your job promotion in a funky club… I really like you, there’s definite chemistry so perhaps we can see a bit more of each other? Who knows, one thing might lead to another and before anyone can say ‘be sure to take precautions’, we could be up to our eyeballs in nappies and baby grows… It does…
That sound funny to you?
It certainly is in Knocked Up, the irresponsible but consistently hilarious new comedy from the makers of The 40 Year Old Virgin. Somehow this manages to be full of laugh out loud situations and pack a sparkling comic script that mixes lewd stoner ‘blokes’ comedy with wry relationship observations. In fact Knocked Up is a surprisingly shrewd lifestyle commentary for our times, which encompasses the reality of responsibility, the nature of love and many of the heartfelt emotions that go with parenthood preparation.
So the question is: can life-long loser slob Ben (Seth Rogen) get his act together enough to be a suitable father for career minded babe Alison (Katherine Heigl) or are they doomed not to make it?
Many amusing trials stand between these two strange bedfellows living happily ever after - with their new soon to be offspring. Firstly there’s the small matter of Ben’s slacktastic housemates with who he is trying to set up a ‘celebrity nude scene’ website. These guys exist in a perpetual ‘frat house’ puerile atmosphere where smoking weed is considered a high art form and females are mostly only creatures seen in movies. Then there’s Alison’s sister Debbie (Leslie Mann) whose marriage to wisecracking Pete (Paul Rudd) is not really an advertisement for blissful family life. If you go to see this with a date, there’ll certainly be plenty to discuss on the way home.
What’s great is that Knocked Up doesn’t fall into the problem faced by many comedies where they take a funny set up and then by halfway through forget to keep delivering the laughs. It’s rude and juvenile to the end (which didn’t go down well with my wife) but I admired the conviction of the filmmakers in sticking to their guns.
And if Knocked Up sounds like your cup of tea, look out for Superbad in a few weeks which cold be this year’s American Pie style teen comedy – the bad taste laughs keep coming!

Out of 5 you have to go with a really funny 4 (safe sex is important but not as funny)... 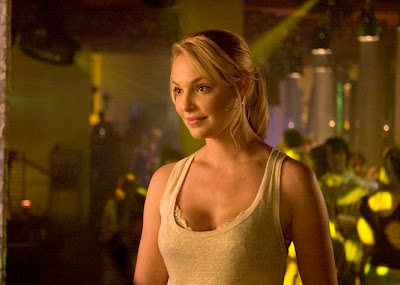 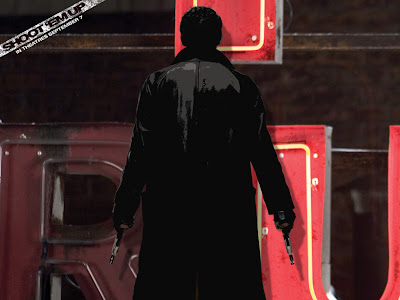 "new contender for 'Matt's film of the year!'

Here's what Variety said about it:

"Director Michael Davis makes the transition from straight-to-DVD stinkers to the bigscreen in conspicuous fashion, with an action movie that is violent and vile in equal measure. When hitman Paul Giamatti is dispatched to assassinate a pregnant woman, not-so-innocent bystander Clive Owen intervenes on the baby's behalf, unleashing a firefight of epic proportions. Good taste is the first fatality in this gonzo thrill-seeker, sure to offend mainstream dispositions, yet too stylistically audacious to dismiss outright."
- check the trailer here:
http://www.youtube.com/watch?v=4t-tT2rBFoU

Am very very excited about this one...
Posted by Matt Adcock at 7:13 pm 2 comments 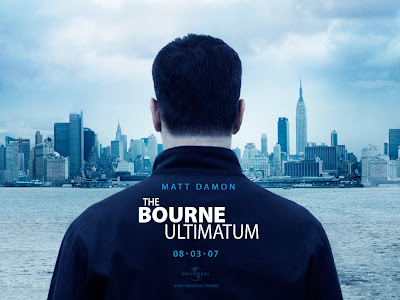 The Bourne Ultimatum (12a)

Will you commit to this program? You will no longer be the person you are now, your memory will be wiped and everything you know will change including your name.

You’re life will be spent executing targets with cold, calm, ruthless precision – never asking ‘why’?
On the plus side you’ll become an unstoppable fighting machine who can dispatch assassins, security forces and thugs with your bare hands.

Driving will take on a new level of danger as every time you get into a vehicle you will find that there are armed people chasing you, smashing into you and generally trying to end your life… This is the world of Jason Bourne and it’s high time you gave it another visit. 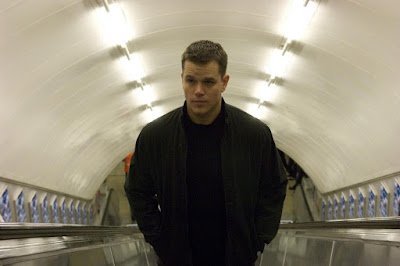 Matt Damon steps up again for this third slice of Bourne ‘one man extermination machine with a grudge against those who created him’ action and boy does it deliver on the action goods. If you’re in the mood for some heart pounding, no holds barred, sweaty palmed espionage excitement – accept no substitute. Paul Greengrass directs with gritty flair, much as he did with The Bourne Supremacy - the crunching action flashes across the globe taking in Tangiers, Madrid, Paris London and New York.

The many and varied fights are really quite satisfyingly brutal, surely pushing the limit for a 12 rated film, Bourne is one guy you really don’t want to get into fisticuffs with. Damon knows exactly what is required in his role because in Bourne he has helped create a powerful and more believable cinematic super spy alternative to Bond.

This time it’s David Strathairn who is the shady CIA mastermind with lots to hide who is on Bourne’s hit list, but he’s balanced by Joan Allen’s ‘nicer’ CIA section chief and a great supporting cast that includes Paddy ‘Hot Fuzz’ Considine as a beleaguered Guardian journalist. Add to this a succession of violence prone CIA black operations ‘assets’ who we are led to believe are lounging around in hotels the world over just waiting for the order to go out and exterminate someone (mostly Bourne actually)… 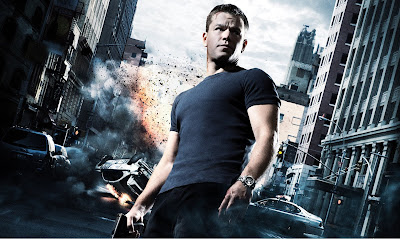 For me The Bourne Ultimatum is the best of this summer’s action movies, delivering effective non-stop tension-inducing thrills and managing to wrap up refreshingly in less than two hours.

My advice is to commit to this programme as soon as you can...

Out of 5 you have to go with a bone crunching:

Action ööööö – so much and so good! 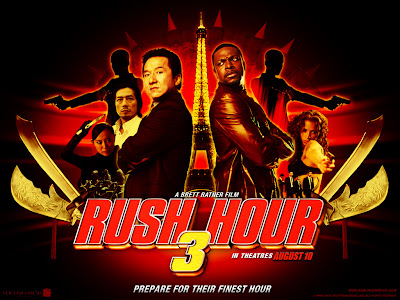 It’s certainly been quite the year of the ‘threequel’ and up until now they’ve been a mixed bag but generally at least averagely amusing, entertaining and / or even impressive in places but I guess it couldn’t last… See, however much you might not have loved this Summer’s 3rd entry block busters – get ready to experience a new vapid low in entertainment values… Welcome to Rush Hour 3.
Yes, watching the third Rush Hour film is like being punched repeatedly in the face by a gibbering idiot (otherwise known as the director Brett Ratner to be precise). There is nothing new here, and what there is was done better in the previous two outings. Chris Tucker does his offensive motor-mouth jive again, Jackie Chan mugs up as the oriental, butt kicking, culturally inept detective again and erm, that’s it really.
You know that there’s little hope of decent entertainment when in just about every scene you think to yourself ‘ah – this is like *name other movie here* only not quite as good’… In fact the only memorable fresh bit I can recall was when the two heroes use a nun to translate their attempted interrogation of a French speaking suspect, but the interview degenerates into them having her straight faced relay various threats and swear words… It’s the audience that they end up torturing…
The Oscar for ‘Best supporting actor in a completely rubbish movie’ would go to Yvan Attal, who is a French cab driver who hates Americans because of their international warmongering but who undergoes a Damascus Road conversion thanks to our two bumbling heroes so he ends up buying into the shoot first rhetoric of most U.S. action films.
Speaking of the so called ‘action’ on offer here – it is weak and utterly unexciting, if you look in the dictionary under ‘lack lustre’ you might well find a reference to the many dull fight scenes in Rush Hour 3. So if the action sucks, surely the comedy will save this purported ‘action comedy’ then?
Alas not – this writers of this tripe should hang their heads in shame at the lazy jokes and contrived supposedly funny situations that they have regurgitated. I think perhaps there is a metaphor for the whole movie in the scene where Tucker and Chan slide into a foul reeking open sewer which taints them both – that certainly could be where their careers are heading if they appear in any more rubbish like this!

Darkmatters ratings:
Action öö – what passes for action here...
Laughs öö – very poor effort
Horror öö – I did get a bit worried that Chan might hurt himself at his age...
Babes ööö – some but not enough to improve the film overall

Overall ö (won't ever want to see this again!) 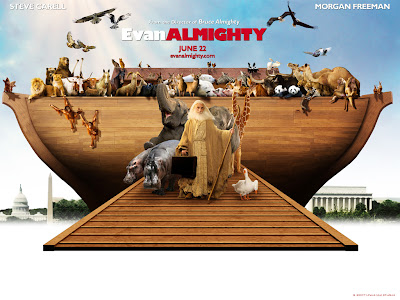 Let me ask you something. If someone prays for patience, do you think God gives them patience? Or will He maybe give them the opportunity to be patient?
If courage is prayed for, does God give you courage, or does He give you opportunities to be courageous? And if someone prays for their family to be closer, do you think God zaps them with warm fuzzy feelings, or does He give them more opportunities to love each other?
These are the theological idioms spouted by God (Morgan Freeman) in Evan Almighty – a quirky, gentle but not altogether successful follow up to 2003’s Bruce Almighty.
This time there’s no Jim Carrey so director Tom Shadyac has picked Steve ’40 Year Old Virgin’ Carell (who played the Carrey’s newsreader nemesis in the first film) to be the mortal whose life God decides to step into in a supposedly comical way. Alas Evan Almighty fails to raise many quality laughs relying on animals pooping jokes and unsightly facial hair of biblical proportions… However, once you get past the fact that you’re unlikely to be splitting you sides, the central premise of a modern day U.S. Noah's Ark story turns out to be a not altogether unenjoyable family friendly experience.
Evan you see is a man going places having just become a Congressman and he is all set for a successful career in politics, But when he is visited by God and asked to build an ark in order to survive a soon to occur flood (which is almost believably given the British summer weather this year) he’s not sure how he’s going to make it happen. Life gets complicated further when pairs of animals of every kind begin turning up unannounced and following Evan around. It doesn’t take long for Evan to be branded a ‘weirdo’ and his ark building project to make the TV news – seems today’s people are no more receptive to the pleas of a doom mongering prophet than they were in Old Testament. The climactic special effects however which sees the ark finally getting put through its’ paces are quite something to behold.
If you’re looking for comedy, Evan Almighty doesn’t really warrant missing out on the Simpson’s high jinks but if you’re seeking a summer holiday parable, which might make you pause and consider life, Evan’s your man.

Darkmatters ratings:
Action ööö – the flood is class
Laughs öö – some but not enough to make it a 'comedy'
Horror ö – add some stars if you fear beards
Babes ö – nope 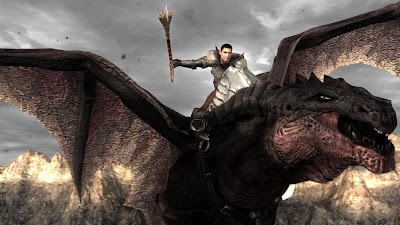 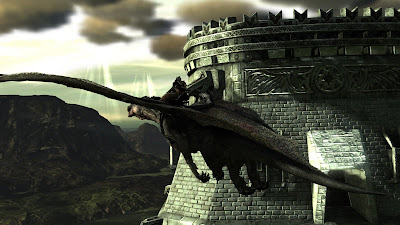 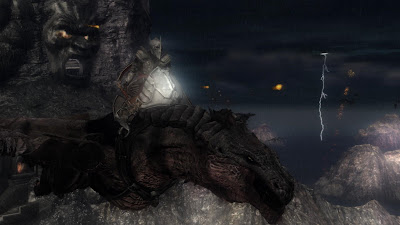 I'm a bit excited about LAIR!!