As a big PS3 fan (with a growing Trophy habit) I was very very pleased to find an invite to be one of the chosen few UK asked to participate in the fabled second life style game interface 'home'...

Sworn to secrey lest Sony's assassins find and kill me - I will just say that from what I've experienced so far, 'home' is going to change the face of console gaming as we know it...

It's slick, it's cool and it is getting ever nearer release - if you've got or are thinking of getting a PS3, get excited because 'home' is going to seriously enhance your experience - forget the Wii Miis or the cartoony new Xbox 360 dashboard avatars... Sony are the daddy and soon we'll all be going home...

More on this when I'm allowed to say!?

Here's my mate Mike (dressed as Indiana Jones, chatting to Alan from Modern Toss about 'home'): 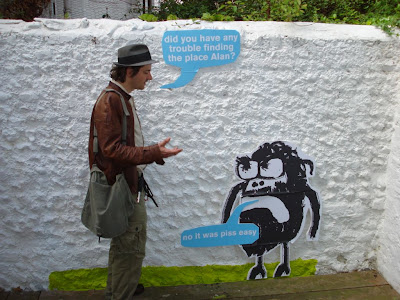 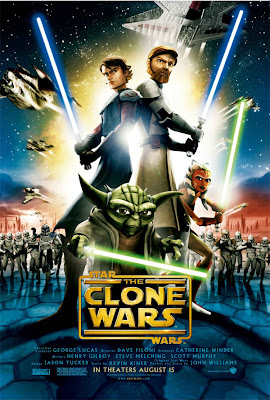 A long time ago, in a galaxy far, far away... there was simply too much money to be made not to bring out another Star Wars film.So here are the stylised CGI Clone Wars, which see the Galactic Republic clones and Jedi battling the evil Separatists led by nefarious Count Dooku (Christopher Lee). Fitting in neatly between Episodes Two and Three, The Clone Wars aims to weave a plot-linking tale that encompasses most of the Star Wars characters.And much to my delight, this animated romp delivers a much more fun Star Wars tale than any of the last three live action prequels! For once the plot is kept reasonably simple – Obi-Wan Kenobi and one day Lord Vader Anakin Skywalker are the main Jedi here, who get caught up in a plot concerning Jabba the Hutt's offspring whilst breaking in new young Padawan apprentice Ahsoka Tano. Everything cracks along at a good pace, there's humour, menace and much butt kicking. It doesn't skimp on the 'war is hell' messaging either, and there is much sacrifice, plenty of honour and lots of treachery exhibited by the various warring factions.The Clone Wars pulses with real meaty action that rarely lets up and the freedom to do pretty much anything thanks to the animated world results in some jaw-droppingly audacious scenarios, which would cost untold millions to attempt in any other format. This is basically Star Wars fan wish-fulfilment for those who felt that the prequel trilogy lacked enough action and excitement.Sure the dialogue hasn't got any less clunky and those who don't know their Wookies from their Phantom Menaces might take a while to acclimatise to the world of Jedi, droids and Sith, but Star Wars: The Clone Wars will delight those who still hold dear the ways of The Force. Don't listen to those nay-sayers who have been turned by the Dark Side – the Force is certainly strong in this new film!

Star Wars is still a 'force' to be reckoned with!

Gratuitous Babeness: ööööööö (7)
+ I know it's wrong but I quite fancy Ahsoka

Comedic Value: öööööööö (8)
+ This has some decent laughs, why can't the live action SW films be a fun?

Arbitrary final rating: öööööööö (8)
The Force is crackling through my veins again

Liable to make you:
"sign up as a Jedi (again)"

DM Poster Quote:
“Just when you thought the force had gone..."

Did you know: Matt's reviews can also be read in the following UK weekly newspapers - The Luton News, The Milton Keynes Citizen and The Biggleswade Chronicle?

1. Matt named his eldest son 'Luke' after Luke Skywalker... Just so he could say to him "Luke, I AM YOUR FATHER"
2. Matt's younger son 'James' wants to be a Jedi when he grows up...

Film Review: The Mummy - Tomb of the Dragon Emperor 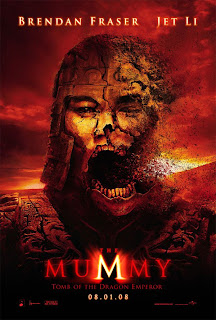 The Mummy: Tomb of the Dragon Emperor (12a)

When there’s serious adventuring to be done everybody knows that there’s only man who fits the bill… a certain Mr Indiana Jones. But what if Indy is off tackling mysterious crystal skulls? Well, then you might consider Rick O'Connell (played by Brendan ‘The Mummy’ Fraser) and his wife Evelyn (Maria ‘Not in The Mummy’ Bello, who pretends she’s Rachel Weisz from the previous two Mummy films).
Yes hot on the dusty heels of Indy’s big screen return stumbles the third of The Mummy films which have tried hard up until now to be almost passable Indy substitutes. Alas
Tomb of the Dragon Emperor is the worst Mummy by a mile, utterly devoid of merit and serving only to show that even when Indy is having a bit of an off day – he’s still head and shoulders better than this risible mind numbing ‘adventure’.
So this time the Mummy causing the trouble is an ancient Chinese emperor (played by an embarrassed looking Jet Li), seems he took over most of the civilised world back in his day and has now returned to grasp immortality and finish his plans for world domination.
Director Rob ‘Stealth’ Cohen is on a major losing streak at the moment, and given that his next film is entitled ‘King of the Nudies‘ I’m not holding out a great deal of hope for that to break his trend of virtually unforgivably bad movies. With nothing but a crack team of CGI artists to try and keep it afloat, The Mummy: Tomb of the Dragon Emperor blatantly ‘borrows’ elements from Jones’ adventures such as a Shanghai nightclub scene, the central character having to find the elixir of immortality after being mortally wounded and even an action theme that evokes bullwhips and wisecracks.
Sympathy has to go to John Hannah who is lumbered with some of the worst on screen dialogue ever (and who has to try and milk a laugh from being sicked on by a yak) – he must really need the money.
The Mummy franchise has effectively put a bullet in it’s own head with this effort, surely the only way a Mummy 4 could be made would be if the plot followed how the script writers, producers and director of this reeking disposable waste of time and money were to be walled alive in a tomb, only to be awoken in future times where they threaten to wreak more rubbish cinematic vengeance on the world…

Endorphin Stimulation: öö (2)
- This is akin to microwaving your brain... it hurts and it's not fun!!

Tasty Action: ööö (3)
- Only the Yetis can look back on this with any satisfaction

Mind Blight / Boredom: ööööööööö (9)
- This should be renamed - 'The Mummy: Tomb of the Mummy Franchise'

Liable to make you:
"cry"

X-Files: I Want to Believe - competition and review 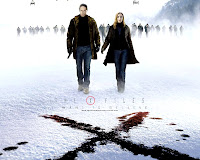 To celebrate the new X Files movie (review below) - the lovely folks at FOX have given Darkmatters some cool X Files swag which you can win!

All you have to do is complete this sentence in 7 words:

Email you answers to: Darkmatters@another.com (this one should work - apologies to those who tried the last one - aliens seemed to have tinkered with it)!!

Editor (whose decision is final) will choose best entries by the end of Aug - the swag is out there... 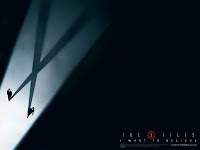 
“I think maybe the darkness finds us…”

There’s a weird guy outside, says he wants to tell you something he’s seen. I know the chap, he’s a one time priest named Father Joe (an over the top but convincingly odd Billy Connolly), mumbling about having visions of missing people, oh and he’s weeping blood. Think it’s time to call Agents Mulder and Scully – who have witnessed almost every conceivable freaky “unexplainable” situation and surely the best suited individuals to sort out this kind of strangeness.
You see The X-Files: I Want to Believe feels like the perfect closing episode of the long running and much loved TV Series (and sequel to the one not quite loved as much X Files film from 1998). This time the story picks up years after Fox Mulder (David Duchovny) and Dana Scully (Gillian Anderson) have left the FBI, each still holding true to their unshakable world views - his quest for the truth that is ‘out there’ and her passionate, intelligent scepticism, which she has channelled into being a brilliant doctor. Carter directs exactly like he’s making an extended extra episode for TV and for every interestingly well shot scene, like a snowy auto abduction, there are several po-faced expositions filling in the blanks for those need to be spoon fed the plot.
But before you can say ‘mysterious abductions’ the dynamic duo are thrown back into the dangerous and kooky /sinister investigative world of cases the FBI can only shrug their shoulders at. Fortunately for everyone the now civilian heroes haven’t lost their knack for cracking horrific crimes which are complicated by paranormal elements and The X-Files: I Want to Believe spins a nicely freakish puzzle for them to try and solve. Just in case a dodgy psychic priest and shadowy illegal body part nabbing conspiracy who have more than a passing interest in swapping heads around isn’t enough – there’s also a tear jerking medical case of a young boy facing an incurable disease which Scully can’t accept defeat over. It’s all very cheesy, the supporting characters are barely interesting and the format feels very retro but if you’ve ever been an X Files fan (and I was such a fan back in the day that my two cats then were named Mulder and Scully) – it might just make you believe again and will probably shift quite a few X Files Series DVD box sets!

Endorphin Stimulation: ööööööö (7)
+ Like a really good episode but no better

Tasty Action: öööööö (6)
+ Nice in places but could have done with more

Gratuitous Babeness: ööööö (5)
+ Scully isn't all she used to be...

Mind Blight / Boredom: ööööö (5)
- Some slogging through the cheese to be done

Comedic Value: öööö (4)
+ Not much except for some visual references

Liable to make you:
"wonder if the truth might not actually be out there after all"