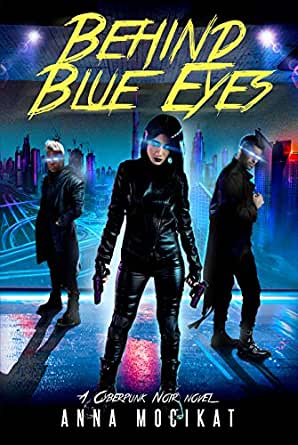 "…her face was the same, with its almost unearthly beauty and that eternally young, innocent look – hiding the most dangerous predator of Olympus."

I was a big Fields of the Nephilim fan back in my teenage ‘goth’ phase (don’t ask) and have also always been fascinated about the fumbled interpretation of the word ‘Nephilim’ in the Bible – giants / demi-gods who mated with human women you say? It’s certainly a passage you don’t hear preached on often.

But here Nephilim is something cooler, something more deadly and beautiful too… A Guardian Angel, taken as a child and enhanced with cyber augmentations to become more than human. A soldier for the forces of authority, an enforcer on the mean streets of Olympias and Old Town. 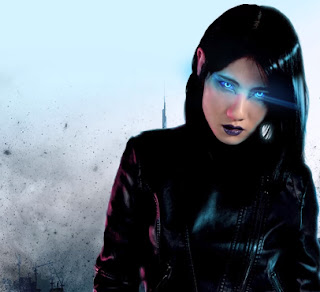 'can you trust her?'

Nephilim is revered as the ultimate death bringer – she uses her genetically and cybernetically enhanced abilities to mess up anyone who stands against the system. But things get messy when she’s shocked with an EMP and falls for a charming human in the shape of wide boy Jake.

What does a killer cyborg do when she begins to question her role in murderously enforcing the peace? This is an action-packed thrill ride through megacities, spewing dystopian themes like toxic fumes as violent battles for the future erupt.

I have got to know as we are both members of the Cyberpunk Coalition (look out for our anthology of short stories which hits in January 2021). Anna explained to me some of her inspiration for writing Behind Blue Eyes, she said:
“I fell in love with the cyberpunk genre back in the late 90s when I saw Ghost in the Shell for the first time. I have seen and loved Tron and Blade Runner before, but Ghost in the Shell was the point of no return for me. The aesthetics and deep philosophical thoughts behind the movie blew my mind. Ever since, I wanted to write my own cyberpunk story in that style but somehow got distracted by other projects.
When I finally started working on Behind Blue Eyes two years ago, it was like a creative explosion. Similar to Motoko in Ghost in the Shell, my main character Nephilim is a cyborg living in a futuristic mega-city. However, Nephilim is like a dark, twisted sister of Motoko. She’s a killer cyborg, designed to hunt down and kill humans who disagree with the “perfect” society. Like in Ghost in the Shell, the question about what makes us human is a central theme in my story. But the conclusion is much darker than in Ghost in the Shell. And way more cynical.”

If you like your cyberpunk hard-boiled and breathless, Behind Blue Eyes should be your next book to read…
Out of a potential 5 - you have to go with a Darkmatters:
ööööö (5 - Cyberpunk you need in your life!)
Click to buy your copy of Behind Blue Eyes Here
Read more Sci-fi!!
Click this banner to find out more about my theologically charged cyberpunk novel...