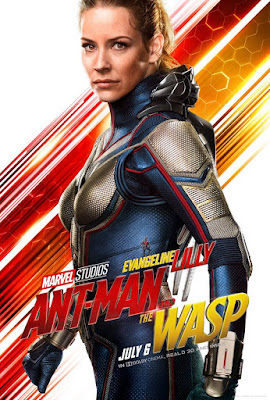 “Nothing can prepare you for what's coming.”

They say it’s not the size that matters but this sequel is a medium sized follow up that brings some light-hearted super fun in the wake of the epic Infinity War. Don’t come here for ‘what happens next to the Avengers’ though as the events occur at about the same time as the huge battle against Thanos (although that is never actually acknowledged unless you stay for the after the credit scene).

The big addition here is the Wasp (Evangeline “The Hurt Locker’ Lilly) who steals the show as the newest mini super-hero on the block. The Wasp packs an upgraded suit with wings and blasters – at one point Ant-Man (Paul Rudd) asks the suit creator Dr Hank Pym (Michael Douglas) ‘So I take it you didn't have that tech available for me?’ to which he gets the reply ‘No, I did’… 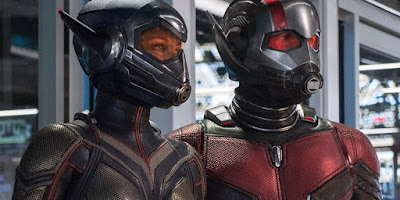 Director Peyton Reed aims to keep the comedy knockabout feel from the first film and this is helped through Scott's efforts to avoid breaking his house arrest FBI curfew imposed on him after the events of Civil War. Alas, the writing whilst funny does miss even the remnants of Edgar Wright’s input to the first film and although amusing there is little that feels iconic.

Everything bounces along in fine style though packing in a new threat from a quantum shifting / walk-through-walls ‘ghost’ (Hannah ‘Ready Player One’ John-Kamen) which adds a fun dynamic to some of the fight scenes. 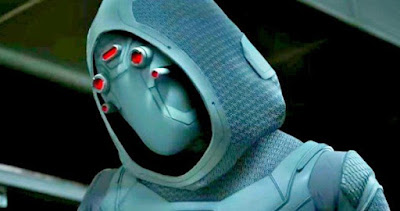 The main plot thread sees Hank’s desperate mission to attempt to save his wife from the trippy quantum realm. This is handled well as it’s pretty ‘out there’ kind of stuff for a mainstream Marvel action-comedy.

The set pieces mostly involve the size changing Ant-Man not having full control of his experimental new suit and they are often played for laughs. Watching Scott grow and shrink at the most inopportune times is comedy gold. One stand out scene sees him stuck at dwarf sized whilst attempting to steal something from his daughters’ school. 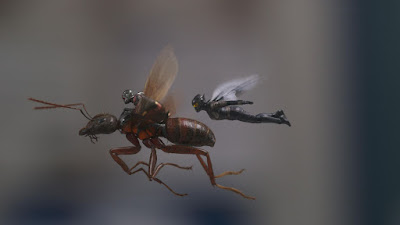 Paul Rudd is so likeable that he helps carry the feel-good factor of the film and he’s helped by the return of bumbling thief-turned businessman Luis (Michael Peña) who has a blast – especially in a funny ‘truth serum’ scene.

Overall Ant-Man and the Wasp is a perfect throwaway fun summer superhero romp which will make you smile and engage you with its medium-sized action….

Horror öö –  Nothing too grim but some violence 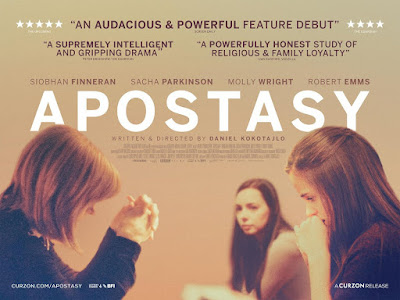 “Throw your burden on Jehovah and he will sustain you.”

All along the Watchtower – the faithful gather in Kingdom Halls striving to do the will of their maker. In this hard-hitting drama from ex-Jehovah’s Witness Daniel Kokotailo lifts the lid on what happens when real life situations fall outside those prescribed as ‘acceptable’ by their religion. 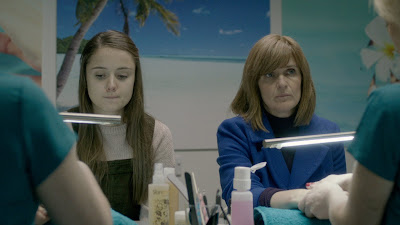 Does an almighty God really want to see people struggle and be ‘disfellowshipped — the Jehovah’s Witness’ equivalent of excommunication - for not adhering to what seems to be arbitrary small print of not attending meetings or a point of disagreement with the leadership? What if a family member makes poor life decisions? Should they be cut off and treated like a stranger? How does a devout mother deal with being forbidden from supporting her wayward offspring?

If you don’t know much about Jehovah’s Witnesses this film gives an insiders insight – they don’t celebrate birthdays, also off the menu are Easter or Christmas which they view as ‘pagan’, oh and feminism is frowned upon as it is almost entirely controlled by male elders. There are currently some 8 million JWs worldwide with close to 130,000 in the UK and they are convinced that the world as we know it will end in ‘this generation’. 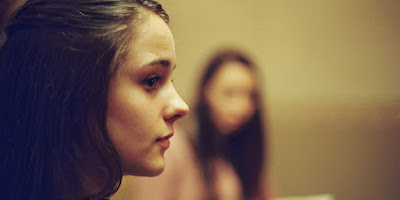 Director Kokotailo in an interview with The Guardian talked about some of the unrest that follows when a prophecy gives a date they believe Armageddon will occur doesn’t pan out - there was a big one in 1975 when people were so convinced that they sold their houses. He said ‘When we joined, they’d removed it [deleted it from the record] so we had no idea it had even happened.’

Apostasy is a fascinating study in dogmatic belief and the fallout it can bring when the teachings start to bear little consideration for the needs and lives of those who follow the faith or those they live alongside. The plot focuses on working mother Ivanna (Siobhan ‘Downton Abbey’ Finneran) who is a firm Witness, she faithfully attends the meetings at her local Kingdom Hall along with her daughters Luisa (Sacha Parkinson) and Alex (Molly Wright). 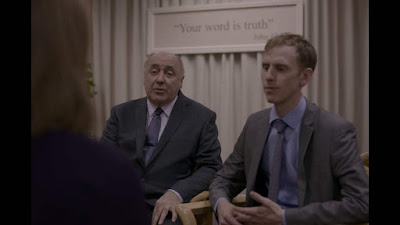 "We're sorry - you didn't get the job this time"

Things begin to get strained when older daughter Luisa, starts questioning the strict rules about choosing meetings over her college lectures, hanging out with non-Witness – and not being keen to do her duty standing offering Watchtower magazines to strangers on the street.

Younger daughter Alex is much more on message, enthusiastically evangelising her friends, learning Urdu to help reach out to the local non-English speaking community and willingly entertaining the notion of being paired off with an older and deeply uncool JW elder when he takes a shine to her. And this despite having had a blood transfusion at birth for her anaemia which is a ‘sin’ to Jehovah’s Witnesses. 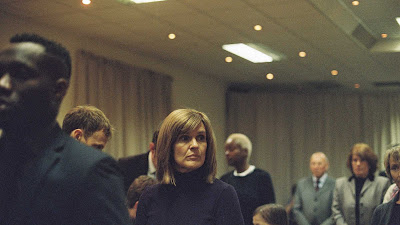 "Inside the Kingdom Hall"

The family drama plotline is framed against talk of how Armageddon is imminent, and that things might be difficult not but soon all will be well when the ‘New System’ comes heralding a heaven on earth for those who have secured their place through works. At one point a big deal is made of how the meetings must be attended and duties fulfilled because ‘God’s love is conditional and must be earnt’…

It comes to a head when Luisa gets serious about a boy outside the faith and ending up pregnant. This leads to a brutal disfellowshipping where she is no longer allowed to mix with the JWs or have anything other than minimal contact with her family. 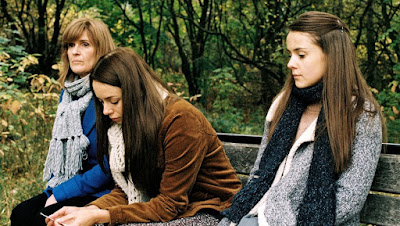 The film is really well made with exceptionally real and raw performances from the three female leads. And whilst it is glumly shot and feels at points like a real-life documentary it also employs haunting and unnerving cinematic shots at the same time.

The writers might expose a lot of what appears to be negative about the JWs but Apostasy takes care to be somewhat balanced and doesn’t mock Jehovah's Witness beliefs. Rather it leaves the viewer to make up their own mind about the faith.

The powerful underlying message, however, is that any form of fundamentalism which removes an individual’s free will to care for those deemed ‘lesser’ or ‘sinful’ doesn’t feel much like the service of a loving God.

(4 - Powerful and heartbreaking - this needs to be 'witness'ed)