Matt meets / reviews 'The Warden' and his author Jon Richter 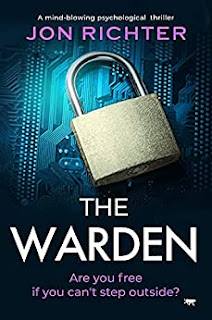 (5 - The pandemic might not be the scariest thing to come)

Buy your time with The Warden here 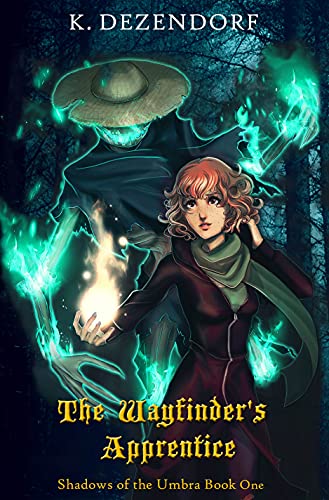 The Wayfinder’s Apprentice (Shadows of the Umbra Book 1)
K Dezendorf (@DezendorfK)
Reviewed by Matt Adcock (@Cleric20)
“the man lifted one of the tarps, revealing a brick wall. Rose’s eyes widened as the man walked right through the wall and vanished from sight, the tarp settling back into place…”
Hang on to your magic hats muggles – this isn’t platform 9¾ - and that brick wall portal is a different kind of magic. Meet Rose – your standard plucky teenage heroine, she’s going through a lot, for example, she knows the magical world of the Umbra exists – because she’s been there. Getting back? That’s the trick…
The Wayfinders Apprentice is new fantasy-em-up that features elves, all sorts of magic, demons and monsters. It’s journey into adulthood in many ways, there is growth, hardship, and an exploration of relationships, plus some battles and lots of lessons being learnt along the way – all combined into a magically charged adventure. If it all sounds a bit like a teenage version of Narnia with real world elf action kinda like the film Bright – plus some bonus Dungeons and Dragons… You’re definitely in the right magical ballpark.
Yes there’s romance and relationships facing unexpected conflicts – but don’t worry it’s not twee like Twilight – Dezendorf writes with a very immediate and engaging style. This is what I like to call 'a great start to the mooted further shadows of Umbra books' and one that I’d have little hesitation in recommending to any YA fantasy fans – bonus points for the strong a ‘real’ lead character in Rose.
It’s a hard trick to blend fantasy and real world effectively and without it feeling trite but Wayfinders Apprentice manages to stay on the right side of the believability chasm. From the wild elf Edward’s talking sword and his mannerisms that will make you smile through to the training Rose undergoes to try and become a ‘wayfinder’. This is trip worth taking and I look forward to the next instalment.
The Infamous Darkmatters ‘10’ Interview Questions:
Matt: If scientists ever managed to create a giant mecha version of you – who or what would be your nemesis?
K Dezendorf: Genetically enhanced giant cockroaches. We would wage war and by the end of it, the town would be covered in bits of bug carcasses and gooey green bug guts. It'd be a heck of a mess to clean up.
Matt: What is the most disturbing fictional scene you’ve ever read or watched in a book/film of any genre?
K Dezendorf: What comes to mind is my recent viewing of the show Invincible. I was completely blindsided by the end of episode 1. Wasn't able to continue with the series after that.
Matt: If you were hired to throw a parade of any scale or theme through the centre of London what type of parade would it be?
K Dezendorf: Re-creations of beautiful landscapes around the world. Forests, mountains, deserts, tundra; all with water, wind, and fire effects.
Matt: You’re in a strange town with £100,000 that you have to spend in a single evening – talk me through what you get up to…
K Dezendorf: I'd probably buy a £100,000 diamond ring that I could later sell, get back the money, and invest it in my child's future.
Matt: Who inspires you most (can be living or dead)?
K Dezendorf: My husband, without a doubt.
Matt: There’s a masked assailant with a gun to your head, who is most likely to be under the mask?
K Dezendorf: A living amalgamation of all my poor life choices.
Matt: What is the meaning of life?
K Dezendorf: 42. Haha, but seriously, I think it's learning to love yourself and be the best you that you can be.
Matt: What was the best gift you’ve ever been given?
K Dezendorf:When we were still dating, my husband gave me the ring he always wore. I still wear it to this day.
Matt: If you could have a sidekick robot – what would it be able to do for you?
K Dezendorf:Jot down my random story ideas that have a habit of manifesting when I'm away from my keyboard. Also if they could cook me anything I requested, that would be an added bonus.
Matt: What would you like written on your tombstone?
K Dezendorf: To be continued...
Matt: Any final words you like to add...
K Dezendorf: Keep on living; never stop dreaming, never stop loving, never stop believing in yourself.
Here's my verdict on The Wayfinders Apprentice..
Out of a potential 5 - you have to go with a Darkmatters:

öööö
(4 - A new and funky kind of magic...)
Buy your copy of The Wayfinders Apprentice here
Click the banner below to check out some dark sci-fi...