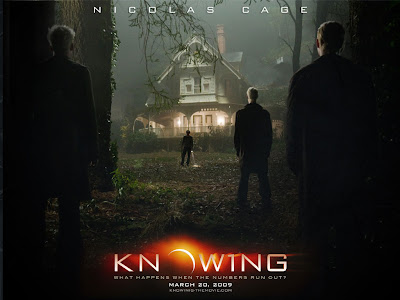 Dir. Alex Proyas 'previously of The Crow, Dark City and I Robot'

“Knowing me, knowing you, ah ha!!” sorry, the wife’s just been hitting the Singstar Abba on the PS3 – whilst I got to witness Knowing and report back on its merits.

What would you do if you had a list of every major disaster which had occurred for the last 50 years – and it included some that hadn’t happened yet, one of which might just be the end of the entire world? That’s the premise for Alex Proyas’ stylish apocalyptic sci-fi epic Knowing which bites off a hard to digest slice of disturbing ‘fate or determinism’ theological debate.

Nicolas Cage (looking more like a startled goat with every film he makes) is an unlikely astrophysics professor whose son Caleb (rising child star Chandler ‘The Curious Case of Benjamin Button’ Canterbury) is the recipient of the disaster tracking page of numbers.

Things get progressively more freaky as the predicted disasters occur in a flurry of budget trashing large scale set pieces that include a truly horrific subway train crash. Knowing keeps the audience guessing by setting up a string of key questions such as ‘What happened to the odd looking little girl who wrote the doomsday number list itself as part of a school time capsule project?’, ‘Why didn’t she fill in a National Lottery grid or two and live happily ever after?’ or ‘who are those weird, darkly clad mystery men who start following young Caleb around?’ There are lots of ideas here, mix and matching influences from numerous sci-fi classics and the result has polarised critics but for me Knowing delivered a decent slice of nail biting hokum.

I freely confess to being a big fan of Alex ‘The Crow and Dark City’ Proyas, he is a visionary director whose last movie I Robot managed to turn the Asimov’s high brow robo-future nightmare into a decent action flick for Will Smith. Here, even saddled with a rank performance from Cage, there is much to appreciate - not least the impressively bleakly hopeful spiritual elements that elevate this way beyond the like of weaker end of days efforts such as The Happening.

Biblical in its scope and uncompromising in the scenes of devastation Knowing isn’t really light entertainment. But, if you’re looking for something to provoke debate and make you wonder again about our human nature and future destiny you ‘know’ what to choose.

Not convinced? check out this review of the film over at FANGORIA - best line:

"And the simple fact that it has more on its mind than the usual empty megamovie spectacle is a plus, even if that mind is severely addled. KNOWING is a lot of things—too many things—but dull isn’t one of them.."
Posted by Matt Adcock at 11:20 pm