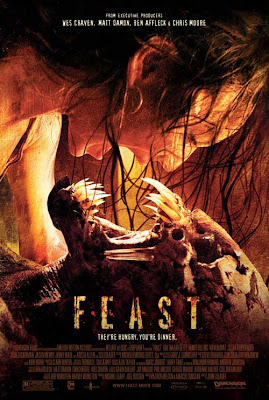 Remember that Project Greenlight thing where Matt Damon, Ben Affleck, and Chris Moore helped produce new flicks... Well Feast is from the third season of that project - and it's a gleefully splatter-em-up monster movie.

Feast is rampantly gory and yet also very tongue-in-cheek. It also boasts one of my all time favourite sequences where it introduces each character with cheeky freeze-frame portrait listing out their Name, Occupation, A Fun Fact and a guide to their expected Life Expectancy... see below

"Worth seeing just for these character intros... will certainly borrow this for Darkmatters: The Movie one day!"

Feast's plot is a simple one - a group of strangers find themselves in a middle-of-nowhere bar, a guys stumbles in - 'Hero' (Eric Dane), who tells that there are monsters from hell on their way... There are and the monsters eat most of the cast.
It's played out heavy on the gore and the funnies, think Aliens meets The Evil Dead 2 and you'll get the idea.

Henry Rollins is funny as a motivational speaker prone to spewing self-help platitudes but this is a B-movie through and through - and should only be watched by those looking for a dumb, horror to go with their beer on a Friday night.

Planning to watch this with the family? Guess again - let's look at the info from 'Kids In Mind .com' who watch nasty FUBAR films and then describe all the most grim aspects in detail on their website so that squeamish folks can avoid such nastiness e.g.: "A creature pulls an animal skull off its head (it was wearing it as a mask) and we see its many very sharp teeth, and it roars and snaps."

You have been warned... 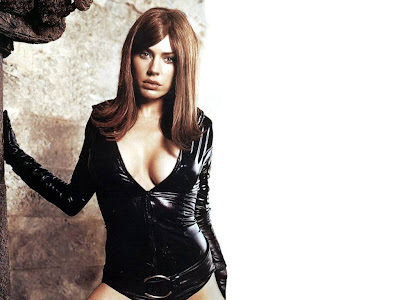 Not convinced? check out this review of the film over at Dr Gore

- best line:"“Feast” is a must see for B-movie fans. It has everything you could want from a monster movie. Monsters? Check. Blood? Lots of it. Dismemberments? Absolutely. Emmanuelle, (Krista Allen), with a shotgun pounding a monsters face in? Heck yeah! The only thing missing from “Feast” is some gratuitous nudity. "
Posted by Matt Adcock at 12:48 pm

Hi! I thought your blog was cool and will visit often. In the meantime I can recommend Horde Leveling Guide.

the temptation of uniforms-"Uniformmate.com"-bring together single members of the Army, Navy, Marines, Air Force, Coast Guard, Police Force, and Firefighters, as well as civilians, veterans for friendship, love, romance, marriage and even more.