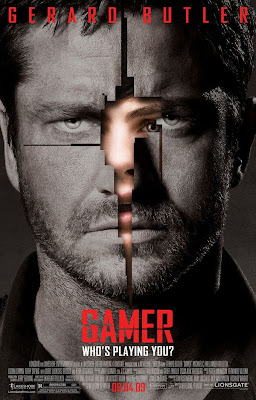 If Sci-fi shoot em up Gamer is to be believed then the future of gaming consists of nano-cells... They’re real small critters, a thousand times smaller than dust particles... If you inhaled a cloud of them you wouldn’t even know until it was too late – they’d be replicating, spreading like a virus, multiplying in exponentials throughout your nervous system. In under just six months a hundred million people could be ‘converted’ and by that I actually mean ‘enslaved’. Yes, this is Gamer and we’re in a dystopian future where nano-cell infused people can be controlled by players and there are two big games featuring this incredible (if morally dubious) technology. 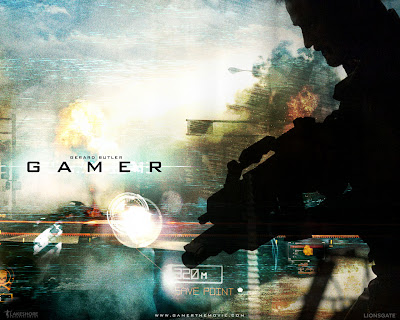 First up is ‘Society’, a Second Life like game that looks like a real life version of the PS3’s ‘Home’ just without any moral boundaries. Players pay to control real people – who get paid for letting themselves be controlled, and there don’t seem to be any limits as to what they can be made to do… Needless to say that this set up leads to a lot of stereotypical fat male gaming slobs perving as they make scantily clad hot females act out their fantasies.

Then there’s the even darker alternative game ‘Slayers’ which is where death row inmates are controlled by gamers in battle games that play out like real life Call of Duty or Killzone 2 levels. High powered weaponry and armour can be downloaded to the players for a price as can various mods (modifications to the players abilities). In a Running Man styled incentive, if a player survives 30 games, they win their freedom with a full pardon but no-one has yet achieved this goal.

Step up grizzled macho hero Kable (Gerald ‘300’ Butler) who has become a celebrity star of Slayers by surviving 27 games. Will he – controlled by his hotshot 17 year player Simon (Logan ‘3:10 to Yuma’ Lerman) – be the first to win his freedom? Could he even be the one to escape the Slayers game world, find and free his wife Angie (Amber ‘Transporter 2’ Valletta) who is being sexually exploited in ‘Society’ and generally save the world? Obviously there are some off the shelf rebels who try to assist Kable – led by rapper Chris “Ludacris” Bridges – who start to slip his player Simon some illegal mods such as one that allows him to directly talk to Kable in game. But the Humanz as the rebels call themselves feel a bit tacked on to the main one man against the odds plotline.

Both the nano-cell based games are created by nasty media mogul Ken Castle (Michael C. Hall from TV’s Dexter) who seems to have plans to expand the games to the point where we are all being ‘played’… But Kable might just be the man to foil Castle’s dastardly plan – so he must be silenced at any cost…

Directors Neveldine and Taylor have carved out reputations for making films that kick ass first and ask questions later with the two Crank flicks. Gamer continues the dim witted hyperkinetic action elements of the Crank series but ups the firepower. Things get blown up in high definition, cars, helicopters and of course people get demolished in blood thirsty close up. Then for the ultimate sex n violence combo we have ‘Society’ which delivers pulsing babes and nudity to the strains of The Bloodhound Gang’s “The Bad Touch.”

Gamer isn’t actually as big or clever as I suspect the makers were secretly hoping it to be but it does deliver some tasty wham bang action, gratuitously sexist titillation and interesting conceptualisation as to what the future of gaming holds. If the next generation of consoles come with a head chips to insert, it might be wise to stick with the trusty PS3!?
All in all it’s a perfect Friday night romp.

Darkmatters final rating of: öööööööö (8 – if you see one game based film this year)

"the future is short shorts..."

This actor looks like Mel Gibson at this photo