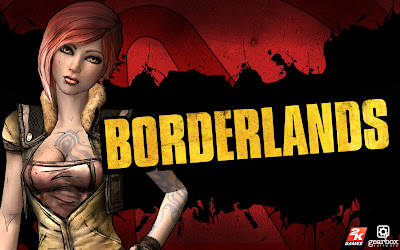 Charlie Brooker said on his fun one-shot TV programme ‘Gameswipe’: “Shooting people in the face never gets old” - just one of the excellent observations made (alongside profiling the history of gaming and showing up pompous twats like Mark Kermode who harbour hatred of videogames as being ‘beneath them – although he was talking about the Wii so maybe I can let him off). Anyway, we’re here to talk about Borderlands - the first title in mooted all-new sci-fi action franchise from the tasty people behind such classics as Bioshock.

Borderlands is not your average mainstream game, oh no, this is a combination of the best elements of first-person action titles with player customisation, vehicular combat, strange beasts and cutting dark humour. All presented in a Fallout 3-esq Mad Max kind of world that has been put through a psychedelic ‘cell shader’ and results in looking like the most amazing cartoonish grown up virtual world I’ve had the pleasure of finding myself. I say ‘myself’ but in Borderlands I’m a ‘Siren’ – a female hottie who can ‘phase walk’ i.e. go invisible and move really fast spewing electricity damage to all who I rub against for a few seconds.

"those dogs have seconds to live... but you're probably not looking at the dogs?"
The plot is of the quest to reach a legendary vault or something… It doesn’t really matter because Borderlands is mostly about guns, lots of guns…oh and a near-endless variety in missions, environments, enemies, weapons, loot etc etc. And whilst it rocks really hard in single player mode, Borderlands is an absolute life changing cooperative online experience, allowing for multiple players to share the same game experience simultaneously, freely joining or leave each other’s games at anytime.

As well as the seriously enjoyable shoot-em / loot-em Diablo style gameplay, the writing team behind this are absolutely on my wavelength… I laughed out loud at the film referencing such as Die Hard mix up ‘Bruce McClone’ or ‘Mad Mel’ instead of Mad Max. There are superb trophies to earn too such as ‘My Brother is an Italian Plumber’ for dispatching an enemy Mario style…

Grinding your way to better levels and buying tastier weaponry means that you’ll meet and kill an agreeably eclectic mix of foes including ‘Mutant Midget Psychos’ or ‘Crabworms’ – yep a giant freakshow mixture of those two creatures. There are aliens packing advanced tech and red eyed soldiers who look like Killzone 2 misfits – and skags (half dog, half Predator), lots of skags. 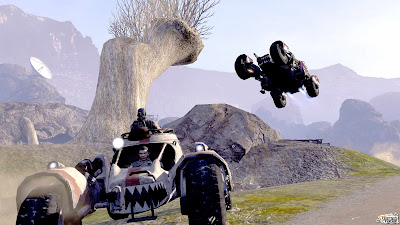 "the road warrior driving bits are great fun"
Borderlands is a wonderful (if violent) experience – it’s not for the weak or the useless at computer games – there is no choice of difficulty level… just the wastelands, the beasts, the guns and promise of zombie downloadable content very soon!
Darkmatters final rating of: ööööööööö (9 – awesomeness for action / shooter / role players everywhere)
Posted by Matt Adcock at 9:01 pm

Fun combat and a steady flow of rewards make this games a massively enjoyable one, especially with some fellow mercenaries along for the ride.

I've had hours of fun playing this on line with my girlfriend. Oddly enough, she's the Hunter and I'm the Siren, for my part mainly because I like maxing out the Siren's Phoenix ability and running through crowds of enemies, setting them on fire at a touch and burning them to death. Or I use a corrosive machine gun and stick it up the nose of the NPC I'm offing while he screams "My face, my face is burning!" Great fun after a dull day working.