Tumble is a building block game, where players use the funky new PS3 Move controllers to pick up, rotate and generally manipulate the various building materials in order to erect towers, blow them up with mines, puzzle the hell out of some dastardly challenges – all in stunning 3D HD (if you have the necessary TV).

Yep, building towers either against a target, an AI competitor or trying to beat a human adversary is much more fun than I thought it would be! Tumble uses the Move motion controller really well, it feels very natural and you’ll soon be stacking bricks like you’re a pro. Simply point at the block you want to pick up, use the trigger to grab and when you have it in the desired position - release it and hope that it doesn’t cascade off to oblivion… 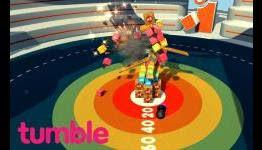 "There she blows!!"
And here’s a thing – you can play Tumble no problem at all sitting down, which might not sound like a big deal but it is more than you can do if you choose to go the Xbox 360 route of Kinect which is a standing only experience.

Puzzling your way through the devious Tumble challenges begins very easy – e.g. build the tallest tower possible. But soon different materials come into play and so you’ll have to watch where you put that slippery ice block or the genius ‘stick to anything’ cubes.

As the traps become more SAW like you’ll find fans trying to blow your bricks over, swinging pendulums and beams, even antigravity areas or mirrors that bounce light.

Each puzzle comes with bronze, silver and gold targets for medals plus hidden bonus ones such as time challenges. It all makes for an excellent gaming experience. Especially fun if you choose to play through the levels cooperatively using a second motion controller, this led to some heated ‘discussion’ with my wife when we tried to work together.

For PS3 Movers with brains, Tumble is an excellent game – which will keep on giving for a long time. Buy it!! 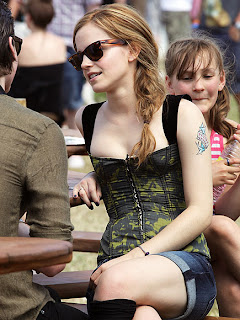 "Rumour has it that Emma Watson likes a tumble"
Posted by Matt Adcock at 7:19 pm

I'd like to use a playstation move controller on that emma watson! big glowing tip and rumble enabled fun would make her move...