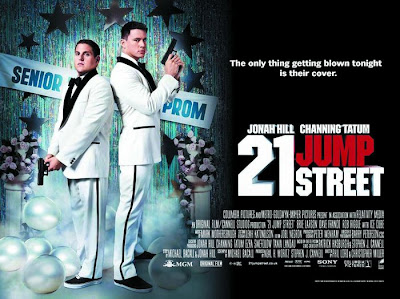 Get ready for a full throttle action comedy remake/reboot of the ‘80s TV Series 21 Jump Street that brought a certain Johnny Depp to public attention.

Double directors Phil Lord and Chris Miller (of ‘Cloudy With A Chance of Meatballs’ fame) ramp up the swearing, crude jokes and general authentic teen banter – which will offend some but is undeniably very very funny when it works as well as it does here.

The two leads are great, embracing their chance to go back to high school – but the delicious twist to this update is that everything has changed. When Jenko was a school he was ‘cool’ and the reason was that he made fun of those who tried, drove a gas-guzzling car and beat up weedy kids. Now he’s everything that isn’t cool - the kids are into eco-friendly projects and Glee, they value their education and frown on Jenko’s Jock mentality. It’s a good spin that reflects how society has moved on and is just one of the nice touches that mark this film out as one to watch rather than a cheap cash in. 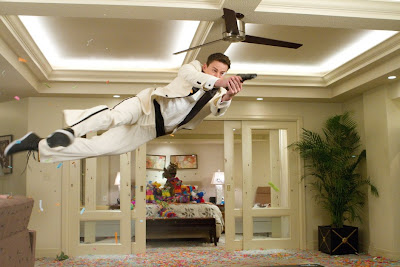 21 Jump Street manages to be laugh out loud funny thanks to a quality cast, pick of the bunch has to be rapper Ice Cube as Captain Dickson, the police chief in charge of the undercover school operation. He gets many of the best lines including commanding the young looking cops to “teenage up” when they turn up failing to look the part.

The plot sees Schmidt and Jenko assigned to try and stop a new synthetic drug that is being pushed in their high school from spreading to other campuses by finding the supplier. They go undercover as brothers, living at Schmidt's parents' house, and against all odds, it is Schmidt who manages to fit in with the popular kids and who finds loves with Molly (Brie Larson). Jenko however has to adapt to becoming pals with the misfits in his Chemistry class whilst fending off the romantic advances of his teacher Ms. Griggs (Ellie Kemper). 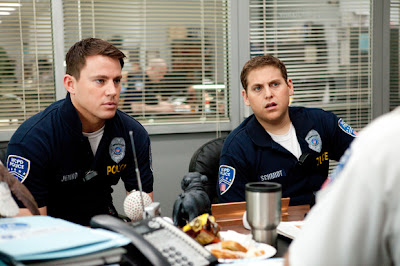 "Tom Wade cameos (the one on the right)"

It all builds up to an exciting climax at the school prom where the film kicks into action mode and is topped off by an awesome cameo.

This is one remake that delivers over and above the original – here’s to the mooted college based sequel!

Laughs öööö – you'll laugh for sure! 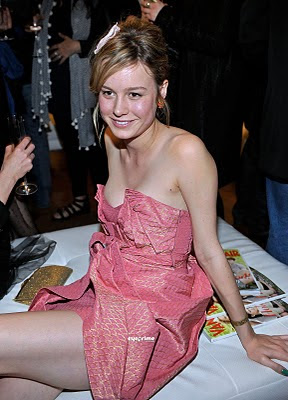 Great review. Hill and Tatum are great together here and add a lot to this film’s comedy but it’s just the way it is all written that makes it even richer. It’s making fun of those high school comedy conventions but at the same time, is inventing it’s own as it goes on. Give my review a look when you can.