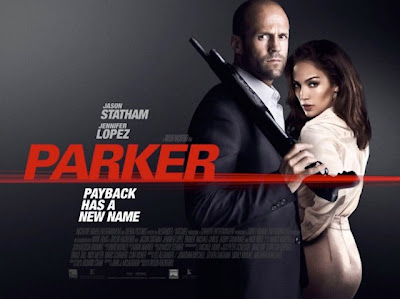 
"I don't steal from anyone who can't afford it, and I don't hurt anyone who doesn't deserve it."

In the aftermath of daring funfare heist that sees a crew making off with over $1 million, Parker (Jason Statham) who led the raid but isn't part of the gang is asked to front his share of the loot to buy in to another bigger job. He's not up for it do get shot and left for dead...

Big mistake by the criminals - because Parker doesn't like being shot and left for dead!

From then on we have a fairly traditional crime drama revenger which see Parker track the gang to their next heist target in Palm Beach - so he pretends to be a big shot Texan looking to buy a home there and crosses his path with sassy / annoybing Real Estate woman Leslie Rogers (Jennifer Lopez). 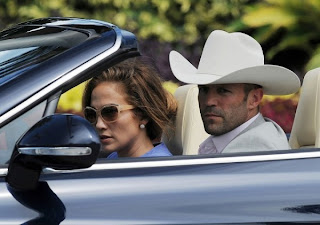 Parker as a movie takes a bullet to the head as soon as J-Lo stumbles on the scene, she's an unnecessary addition which brings nothing to the party except her curves - which director Hackford (the 'ford' is silent') at least makes her get out in a fully gratuitous scene where Statham forces her to stip down to her undies and who him her ass 'to prove she's not wearing a wire' absolutely ahem...

Somewhere in Parker there is a half decent crime movie and if there was a directors cut that removed all of J-Lo's scenes it would certainly be a whole lot better. Statham is the new Bruce Willis and is watchable as always, the violence is crunching and there are a couple of exciting showdowns (a great and brutal knife fight in the hotel being the pick of the bunch) but overall this is limp B-movie no-brain easy viewing.

What is perhaps saddest about Parker is that it was made 'In memory of Donald E. Westlake' who wrote the original character in several books and died in 2008. Westlake wouldn't let filmmakers use Parker's name in film he didn't think lived up to his novels - so we've had John Boorman's Point Blank, where Lee Marvin as "Walker" - John Flynn's The Outfit, with Robert Duvall as "Macklin" - and even Brian Helgeland's Payback, which had Gibson as "Porker" - sorry "Porter"!? That sound you can hear? That's Westlake spinning in his grave at Parker finally being used in what has to be weakest effort based his books to date...

2 – Statham is always good but he can't save this mess

Awesomeness ööö – some nice scenes but not enough

Good review Matt. It's a very, very dumb movie, but at least it's fun, right? Maybe it was just me in the end.