“You think your world is safe? It is an illusion. A comforting lie told to protect you. Enjoy these final moments of peace. For I have returned, to have my vengeance!”

It’s a good feeling when you see a sequel that delivers on the promise of the first film – especially when it’s a rebooted series… But Star Trek Into Darkness under the expert direction of J. J. ‘next up will be Star Wars Episode VII’ Abrams is a joy to behold for Trekkies and fans of quality cinema thrills alike.

Into Darkness picks up straight from the end of the 2009 Star Trek that successfully reengineered whole cinematic presence of the starship USS Enterprise and her crew led by Captain James T. Kirk (Chris ‘soon to be the new Jack Ryan’ Pine).

Darkness however lives up to its name in that it brings a new level of threat in the swathe and menacing form of Khan (Benedict ‘Sherlock from TV’ Cumberbatch) – an enigmatic agent of mass destruction with a hidden agenda. 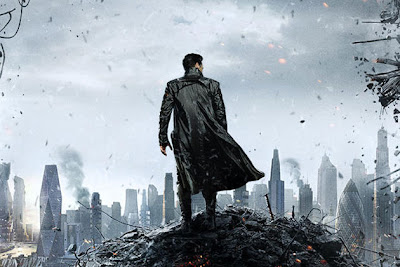 The plot involves the good guys Kirk, Spock (Zachary Quint), Bones (Karl Urban), Scotty (Simon Pegg) and Uhura (Zoe Saldana) desperately trying to halt Khan’s seemingly unstoppable campaign of terror from which is targeting Starfleet. The rapport of the Enterprise crew is a winning one which helps gloss over the occasion plot hole – along with copious amounts of lens flair.

Captain Kirk is picked to lead a dangerous manhunt into a war-zone to try and capture Khan – easier said than done considering he’s one-man weapon of mass destruction. It makes for an exciting rollercoaster ride that sees the Enterprise out maneuvered and out gunned. Is this the premature end to their potential new long running franchise? If you’ve seen the trailer you’ll know to expect serious potential losses… 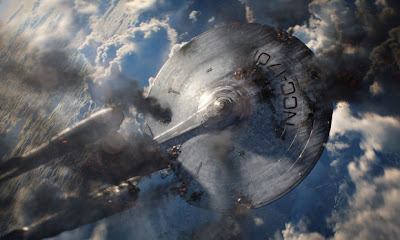 Into Darkness brings lots of fan references including stuff only Trekkies will really ‘get’ like a Tribble being experimented on but also some upgraded visual effects and iconic new technology. Alive Eve is also on hand to catch the eye (and Kirk’s attention) as the new crewmember Dr. Carol Marcus.

This is a great movie that continues the series in fine style, it also bodes well for the planned Star Wars VII as Abrams is clearly at home with sci-fi adventure.

I highly recommend that you boldly go and see Star Trek: Into Darkness…