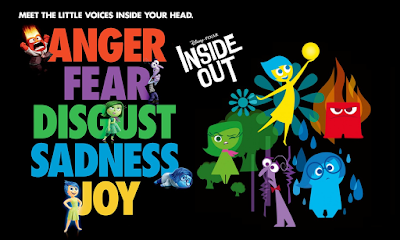 “Crying helps me slow down and obsess over the weight of life's problems.”

You ever wonder what’s going on inside people’s heads, even your own? Well the dream weavers at Pixar have blown the doors off the inner workings of the psyche with Inside Out. And it turns out that how we react to things is down to a group of emotions who control our responses. 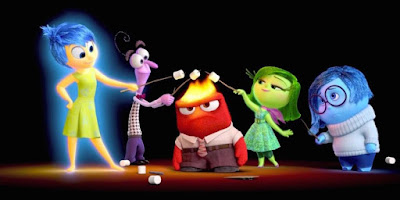 Directors Pete ‘Up’ Docter and Ronnie Del Carmen have a great time showing the interplay of the emotions as they struggle with the reactory impulses of dealing with what life has to throw at 11-year-old Riley (Kaitlyn Dias). We get a potted life-so-far update and then are thrown into the trauma, excitement and stress of young Riley having to move towns, schools and houses due to her dad getting a new job. 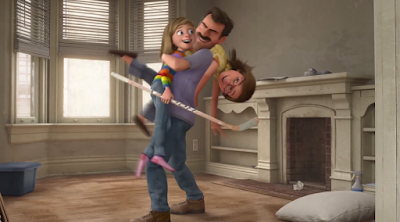 The thing is – every experience Riley has be it positive or negative is stored in her mind as memories - depicted here as translucent orbs of varying colour e.g. blue = sad, yellow = joyful etc. The childhood Riley has lived has been a pretty joyful one and there are banks of glowing golden orbs to show for it, backed up by some core memories that are her personality anchors. These include family, friendship, hockey and madcap-ness…

Disaster strikes the Riley’s pre-teen existences when a core memory accident transports both Joy and Sadness out of the control room and into the wider expanse of Riley's brain. Leaving the inadequate B team of Anger, Fear and Disgust at the helm – which is a superb analogy for the onset of ‘teenage’ behaviour… 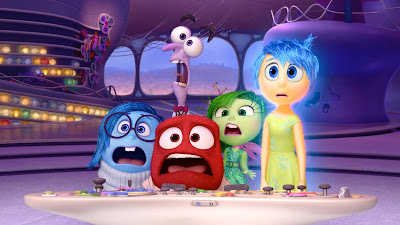 It would be wrong to go through too much more of the engaging and genuinely moving plot – but rest assured the heroic battle of Joy and Sadness's quest through Riley's mind is inventive and fun to watch. Side characters such as Riley's fast fading imaginary friend BingBong (Richard Kind) who has a dream rocket powered by songs are well used devices. The creativity at work by the Pixar team such as having a ‘Train of Thought’ depicted as an actual train that moves through Riley’s brain is superb. My favourite area was the dream production factory which is shown as a TV like studio where the dreams are scripted and acted out when Riley goes to sleep.

Inside Out is a great film which will move and engage you – even if the slightly trite ‘Joy and Sadness are just as important as each other’ messaging is laid on thick. 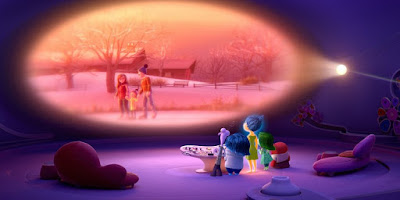 This is pretty much a must see for anyone in possession of a brain – and I’m sure viewing Inside Out will help stock up some golden globes of joyful memories for you’re memory vault!