“Something very weird is happening to me: I keep killing people! There's a chance I may be... a robot!”

I am a highly trained special agent – able to tackle any threat with little more than the objects around me. In my hands a dustpan becomes a means of decapitation, a spoon a potent murder weapon and a frying pan - a bullet deflecting trick shot bullet guidance device. But I’m not active like Borne or Bond, my name is Mike Howell (played here by Jesse Eisenberg), and I am a stoner convenience-store clerk. Life for me is a series of meaningless days, frequent panic attacks (which stop me from travelling) with the only high points thanks to my awesome girlfriend, Phoebe (Kristen Stewart). 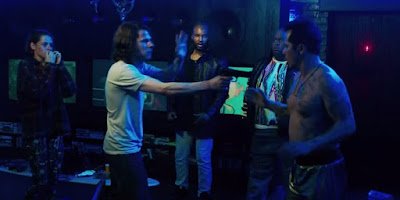 Life goes on, I buy drugs from my dealer Rose (John Leguizamo) in order to get through the day but everything changes when a kill squad of heavily armed assassins come to take me out. Seems the boss at CIA has decided to wipe out all unused operatives and I’m on the hit list.

Director Nima ‘Project X’ Nourizadeh brings his ‘A’ game with American Ultra – an action comedy indie and thanks to screenwriter Max ‘Chronicle’ Landis, the film crackles with enough dark comedy alongside the crunchingly violent action.

Eisenberg is superb in the lead – wielding his winning geekiness and loveable charm even whilst cutting a swathe through the ranks of killers ranged against him. Stewart is a decent foil and proves to be surprisingly adept at helping Mike fight to survive. 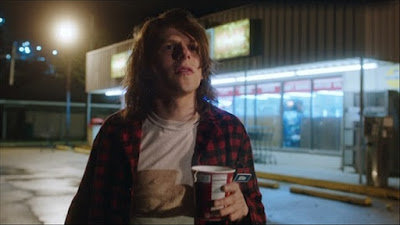 The romantic core of the film works well too – the running joke of Mike looking for the right moment to propose to Phoebe adds a feel good element which helps offset the genuinely jarring violence. Mike is a fun unwitting hero – a lethal slacker who’d rather be writing his graphic novel about an astronaut monkey than fighting off goons.

The bad guys are led by vicious but pitiable Yates (Topher ‘Predators’ Grace) whose team includes the seemingly unstoppable ‘Laugher’ (Walter ‘Sons of Anarchy’ Goggins) who has more than a little of Batman’s Joker vibe to him.

American Ultra is a cool, adrenalin fuelled romp, which offers a great alternative to more mainstream action films. This is a cinematic hit you should definitely accept, man. 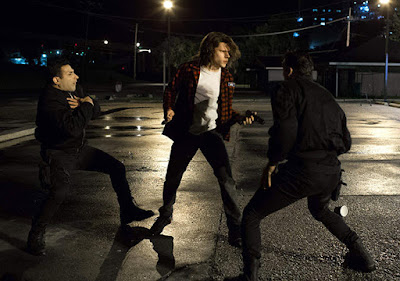 "don't mess with the clerk"

I love American Ultra
I love Kristen and Jesse