Darkmatters Review: Stewart Lee - A Room With A Stew

Stewart Lee - A Room With A Stew


AS an over 40 year old, I fared better then many of the audience at Stewart (once of the awesome Lee and Herring comedy duo) Lee show. He's not adverse to mocking those who have paid to come and witness his 'work in progress' preparation of material for his next BBC 2 series of Comedy Vehicle, especially if you're under 40: "You young people, this isn't aimed at you. You have your own things, don’t you? Like Minecraft and bondage sex."...

Seeing Stewart Lee live is a mentally kinetic, interactive experience and the Leicester Square Theatre is a superb. The ambience in this genuinely intimate venue allows Lee's deadpan infectious charisma to creep up on you, before his long game punchlines deliver stunning laser sighted blows to your brain's comedy endorphin receptors. At near two hours this show is form of deep dive therapy or a treatise on modern life for those struggling with make sense of our almost post UKIP world.

The material is controversial and engaging, getting around your outrage defences by building mental scaffolding that take you up to topics which few others would dare to tackle. His cat 'Jeremy Corbyn' and it's bowel problems command a centre stage rendition of 'God Save The Queen' for one of the  rough episodes in a way that will be seared into your mind long after the show wraps. 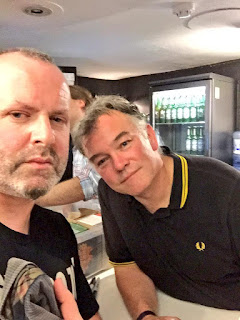 Lee's views are in the ball park of 'politically correct by way of intense non-conformist liberalism' - his stinging barbs hit their targets without making him look mean or anything less than ironic. It is an unalloyed joy to watch Lee skilfully deconstruct a topic as inflammatory as Islamic views of other religions and leave the viewers mulling over their own potential prejudices even while they laugh heartily - partly out of relief.

Nothing is off bounds. Lee talks about other comedians - both the young ones who repeatedly come to see his shows for tips and a brilliant Graham Norton BAFTA win extended anecdote that takes in James Corden,school orienteering with the original band members of Napalm Death and his mortgage repayment plan. The skill here is in weaving such an engaging narrative while keeping the audience laughing along.

A Room With A Stew is a highly recommended night out, worth catching now in order to see how the material will have been honed and polished for the new Comedy Vehicle series - which on the strength of this show is going to be unmissable and might just snag him that illusive BAFTA!?