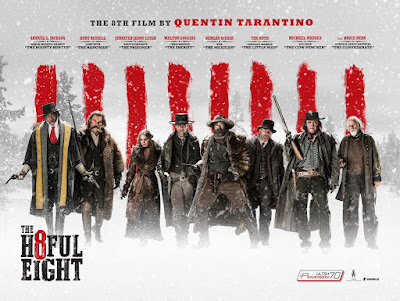 
The 8th film by Quentin Tarantino takes us back to post Civil War America where we join a stagecoach cutting through a wintry Wyoming landscape en route to the town of Red Rock – and a date with justice.

Legendary bounty hunter John ‘The Hangman’ Ruth (Kurt Russell) is taking his captured fugitive Daisy Domergue (Jennifer Jason Leigh) to hang for her crimes. But it won’t be easy. Faced with a blizzard and encounters with a rival bounty hunter Major Marquis Warren (Samuel L Jackson) and Chris Mannix (Walton Goggins), who claims to be Red Rock's new sheriff, the coach party decide to hole up in Minnie’s Haberdashery.

What happens next is a delicious pressure cooker of guilt, suspicion and bluff – which builds up to a horrifically violent climax… Playing out like a western homage to Agatha Christie’s And Then There Were None – The Hateful Eight is a compulsive mystery delivered with Tarantino’s over-the-top theatrical flair.

The ‘hateful’ suspects are a bunch of scoundrels who along with Ruth, Domergue, Warren and Mannix include General Smithers (Bruce Dern), Hangman Oswaldo Mobray (Tim Roth), Cowboy Joe Gage (Michael Madsen) and Seńor Bob (Demian Bichir). At least one of them could be lying and have murderous intent.

Who will survive and will any of them see justice? There is much profanity laden fun to be had finding out, as with all of Tarantino’s work, this is not for the faint of heart, easily offended or for anyone squeamish.

With a running time to rival some TV mini series and all the action taking place in only a couple of locations The Hateful Eight could have been an exercise in tedious, self-referential dialogue heavy boredom. But thanks the who-can-you trust suspicion backed up by some excellent performances, what we have is a riveting thrill ride and a step up from the fun but disjointed Django Unchained (Darkmatters Review).

"It's not just the cold that kills"

Jackson makes for a great flawed hero of sorts but Kurt Russell is the stand out here – packing an incredible moustache and some righteous authority, even if they are only slightly less reprehensible – you could say eight shades of criminal grey - than the vermin who they mix with. I feel obliged to point out the Kurt Russell plus snow = The Thing homage connection too!?

The Hateful Eight will make you laugh, squirm and possibly look away in disgust, these are some ‘reservoir cowboys’ worth hanging out with.

Horror öööö – Nasty to the point of horror in places