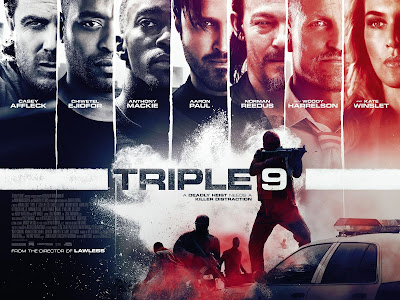 “There’s no limit to what desperate men will do when pushed.”

Step this way for a stylishly hard boiled action-crime-drama directed by John ‘Lawless’ Hillcoat that comes on like Heat meets True Detective. This tasty heist-em-up follows a group of dirty cops who find themselves in the line of fire when crossing paths with the Russian mob. 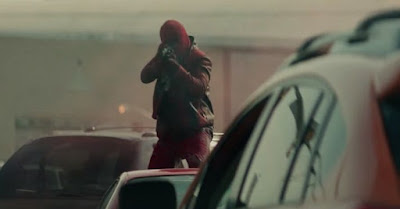 The plot rips along at a frantic pace, the initial heist and freeway shootout is a tight, nail biting affair. But before you can say ‘there’s no honour among thieves’ the pressure begins to tear the crew apart. Things go from bad to worse when Kate Winslet’s nasty mob boss demands a seemingly impossible ‘one more job’ from the gang or else they will all be executed.

So with limited options Tomkins devises a plan to have Allen killed to trigger a ‘triple nine / officer down’ in order to create a diversion which they can use to attempt the heist. From then on all bets are off as to who, if anyone, will survive – especially with Woody Harrelson in the mix as a dangerous investigator who tells his team to “out-monster the monsters.” Easier said than done when Allen and Atwood find a row of severed heads lined up on a car bonnet – the monsters here are not nice.

"why detective, what big teeth you have..."

Triple 9 is a taut action-thriller which deals in serious violence, greed, betrayal and quotable banter. Drug dealers, strippers and gun totting gang-bangers, ensure that this is a super seedy trawl through the underbelly of city on high alert. The cast is superb and their sterling work elevates this above your average cop flick.

Winslet is an absolute revelation as the psychotic mob boss and her acidic chemistry steals every scene she’s in. New Wonder Woman Gal Gadot is on hand too as the love interest / potential kidnap leverage, but the male leads have their work cut out to match Winslet as this is her film.

Highly recommended for crime action fans – Triple 9 is more ‘End of Watch’ than ‘Ride Along’ so come prepared for some heavy duty, hard hitting thrills.

(4 - Not black or white - just exciting shades of violent grey)

Spiritual Enlightenment ö - not much alas

Been curious about this one. I like the cast, but I had my doubts. Good to see that it's more End of Watch

I've just installed iStripper, so I can have the hottest virtual strippers on my desktop.