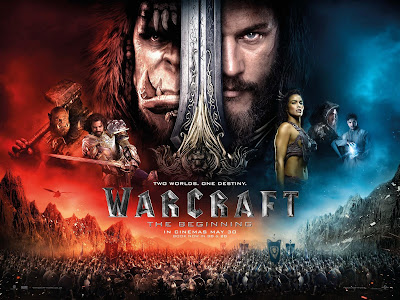 Warcraft: The Beginning (12a)

Read the newspaper version of this review over at: The Observer

“Our hope is destroyed, there is nothing to go back too. Is war, the only answer?”

Welcome to Azeroth, a peaceful realm that has a big problem – the kingdom stands on the brink of war as its fair citizens’ face being invaded by a fearsome race of bloodthirsty orcs. No this isn’t a stealth fantasy Brexit campaign, this is Warcraft: The Beginning, the big screen adaptation of the hugely popular video game.

First things first, Warcraft: The Beginning isn’t based on World of Warcraft, the huge online multiplayer nerd-em-up but rather mostly focusses on Blizzard’s first Warcraft game (Orcs & Humans) which helped shape the video game genre called RTS ‘real time strategy’ - where opposing players command virtual armies in battle against each other or a computer-controlled enemy. I know this because as I was an avid fan of the game on PC back in 1994, much to my wife’s disdain.

Video games have mostly not faired well when given the cinema treatment. Here the very credible Duncan ‘Moon’ Jones steps up to the challenge as director and whilst Warcraft: The Beginning won’t be for everyone – it is certainly a decent effort. 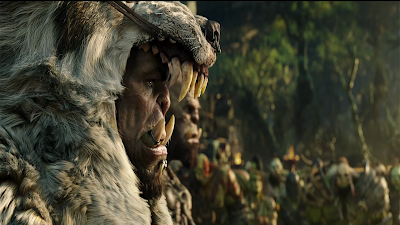 The plot is an origin story – the epic tale of the first war between humans and orcs. The orcs, led by fierce and noble Chieftain of the Frostwolf Clan - Durotan (Toby ‘Dawn of the Planet of the Apes’ Kebbell) must leave their world as it is dying. With Azeroth their refugee destination of choice and not much in the way of negotiation skills other than ‘kill’, this is bad news for the humans, dwarves, elves and other peaceful fantasy types.

But the humans aren’t weak, they have armies and the brave Sir Anduin Lothar (Travis ‘Vikings’ Fimmel), the Lion of Azeroth, the last true descendant of the ancient Arathi bloodline and knight champion to boot.

"I can see Cloud City from here"

Warcraft: The Beginning looks absolutely incredible, you can feel the ten years of geeky love that has been poured into creating the world and the inhabitants, backed up by seriously cool CGI and practical effects work deliver a treat for your eyes. The human soldiers look epic in their battle armour (a wonderful upgrade of the video game original). The orcs are marvellous creations who make The Lord of the Rings efforts look like pantomime bit players, especially Orc Shaman Gul'dan (Daniel 'The Man with the Iron Fists' Wu) who channels the horrifying Fel. The battles are furious and suitably exciting, squeezing quite a bit of fantasy violence into the 12a rating to boot.

But not all is so good.

The dialogue is as expected made up of high fantasy cliché tripe, fine once you acclimatise, but what is less forgivable is the acting. Whilst Ben Foster steals the show as the magic wielding Medivh, whilst everyone else seems to be in generic A.I. circa 1994 mode. 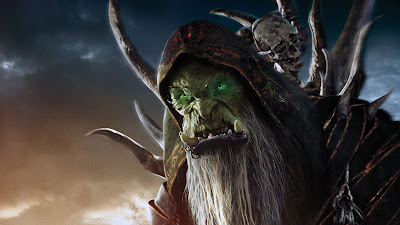 Not a complete dud, fantasy fans should certainly check out this new beast on the block, just don’t be expecting a big screen Game of Thrones.

Laughs öö – Some mirth to be had

Horror öö – A little scary and violent at times