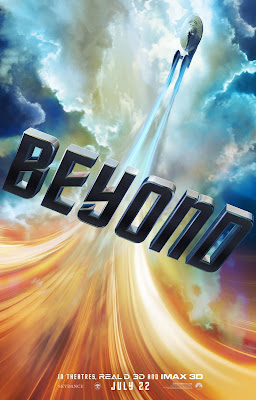 “Captain's Log, Stardate 2263.2. Today is our 966th day in deep space - A little under three years into our five-year mission. The more time we spend out here, the harder it is to tell where one day ends and the next one begins.”

"If you only knew the power of the dark side..."

Star Trek is back – you know the ‘other’ sci-fi franchise that has never been quite as cool as Star Wars but which has legions of devoted fans… Well, following in the intrepid footsteps of Director J.J. Abrams who reinvigorated the Trek cinematic universe before turning to the dark side and jumping spaceship to make The Force Awakens, comes Justin ‘Fast & Furious’ Lin.

And Star Trek: Beyond is everything a Trekkie could wish for! Nice nods to the original TV series abound – the opening scene in particular could be a HD reworking of one where Captain James T. Kirk (Chris ‘Smokin Aces’ Pine) is set upon by furry little space critters. The good news keep coming though in that Beyond feels very much part of the new Star Trek cannon – helped by having returning key cast members such as Spock (Zachary Quint), Bones (Karl Urban), Scotty (Simon Pegg), Uhura (Zoe Saldana) and Chekov (Anton Yelchin RIP). 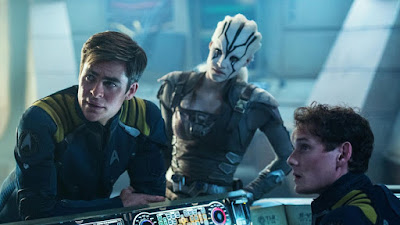 The scale of threat in this sequel has been suitably ramped up – with a new baddie Krall (Idris ‘Luther’ Elba) intent on mass extermination of human kind. Also new the party this time is butt kickin female alien Jaylah (Sofia ‘Kingsman’ Boutella) who pretty much steals the entire movie with her broken English phrases and kinetically exciting fighting skills. With the Enterprise out gunned and the crew dispersed, this is probably the most intense Star Trek film to date. A friend saw this in 4DX and told me he felt like he’d been ‘beaten up’ by the end, so be warned,

With top notch special effects, nail biting tension and some great humorous touches, this is sci-fi that can be enjoyed by pretty much everyone (it may be a little scary in parts for younger children, but there was an 8-yr-old at the screening I was in and he left telling his folks that it was ‘awesome’,

"Kirk gets fast and furious"

The Star Trek franchise shows no sign of slowing down and indeed is now giving the Star Wars films a run for their money. You should definitely ‘boldly go’ and see this as soon as your teleporter can beam you to your local cinema!

Laughs ööö – Enough for a sci-fi to feel good

Spiritual Enlightenment ööö - It's a big universe out there!