So, unfortunately, the world’s favourite perv-em-up is back for mediocre second helpings of big screen sadistic flavoured relationship distortion. The billionaire with sex issues Christian Grey (acting like a plank again Jamie ‘Marie Antoinette’ Dornan) is still pursuing Anastasia Steele (the much too good for this tripe Dakota ‘Black Mass’ Johnson). 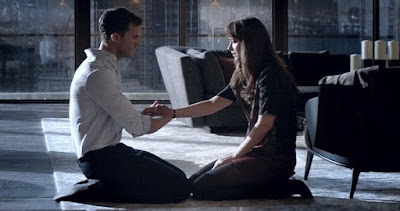 The flimsy plot which is contractually obligated to pauses about every 10 mins for a bonk session sees Ana trying to move on from her relationship with Grey but he convinces her to resume their romance under new conditions. Alas their new more ‘normal’ relationship is soon threatened by characters from Grey’s past and Ana’s present.

If anything, this sequel is so poor that it makes the original look quite good in comparison (Darkmatters Review here) – Director James ‘Who’s That Girl’ Foley somehow manages to make the film unsexy despite the copious amounts of sex in it. 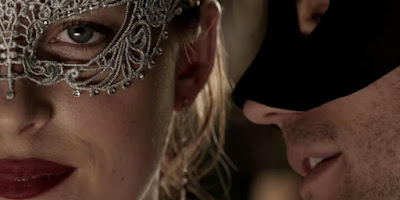 Quite why Ana is so drawn to the wrong un Grey - a messed-up character, certainly not a hero to be emulated – brings the dangerous message that apparently women should be prepared to put up with deviant abuse and sexual power games if the bloke has money and looks. Can you imagine how this film would play if Grey was a homeless obese redneck - it would feel much more like a horror film.

"a brief moment of excitement"

Fifty Shades Darker is worryingly still trying to normalise the disturbing notion of sadistic relationships aren’t all that bad. Having said that there’s not actually much excessive kinkiness on display and the pot boiling drama efforts would be embarrassing for a daytime TV Soap.

Based on merit, Fifty Shades Darker wouldn’t even make it as a direct to video release, the fact it’s part of a worldwide phenomenon is a tragic indictment on our cinematic tastes. Alas there’s still another one to come in this awful trilogy…

Laughs öö – Limited mirth, unless you count the unintentional stuff

Spiritual Enlightenment -öööö - Glossing over issues will end in tears