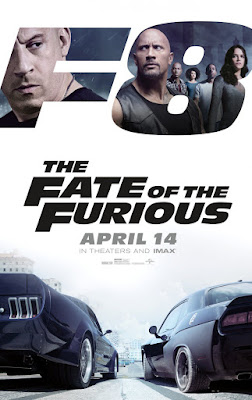 “What's it gonna be? You're gonna close your eyes on world war 3 or you're gonna saddle up and save the entire damn world.”

The Fast and Furious vehicular mayhem-em-up is back and shows no signs of slowing down. Following the ever escalating adventure of the ‘family’ of car racers / thieves / international heroes this time we have Dom (Vin ‘Guardians of the Galaxy’ Diesel) and Letty (Michelle ‘soon to be seen in Alita: Battle Angel’  Rodriguez) on their honeymoon when a mysterious woman seduces Dom back into the world of crime he’s tried so hard to escape. 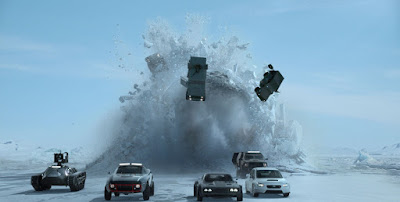 "things get a little our of hand"

The seductive baddie is Cipher (Charlize ‘Mad Max’ Theron) a criminal mastermind and cyber-terrorist who makes Dom turn against his fam and thus we get a battle royale as the former pals must work against each other.

Is it as loud, stupid and fun as the previous entries? Oh yes and there’s more action, bigger set pieces and ridiculous dialogue – the Fast & Furious franchise has become something cinematically joyous to behold but dumb as you like.

"the traffic is killer"

You must know by now if this is your adrenalin pumping cup of tea or whether the whole clichéd crash-bang-wallop will leave you screaming in pain. Fans will lap up the insanity and those just looking for a no-brain cinema trip are well served but anyone in search of a meaningful plot, acting or semblance of sense should move along.

The plot (if you can call it that – stretches to over 2 and half hours) sees Dom having to work with previous mortal enemy Deckard Shaw (Jason Statham) and DSS agent Luke Hobbs (Dwayne Johnson). Along the way there are hacking of self-driving cars, tanks on ice, a car vs submarine showdown – yes this really is going to be hard to top for sheer ballsy auto-action. 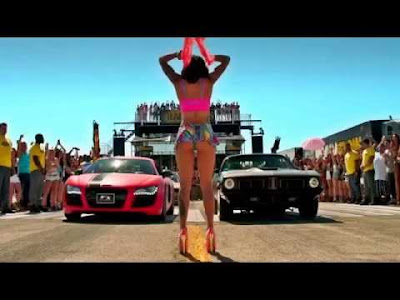 It is all filmed in flashy style and director F. Gary ‘Straight Outta Compton’ Gray keeps it ticking along but it does start to feel like they might have gone as far as they can on this franchise’s ride. Especially missed here is Paul Walker – who helped hold the previous films together – his untimely death is always in the back of the mind when the car crashes are non-stop.

So there you have it the ‘Fate of The Furious’ as the film is called in the US is decided with a lot of explosions, banter, general macho posturing and a Helen Mirren cameo. Buckle up if you’re gonna take this trip – you’ll need to rest your eyeballs afterwards!

(3 - Fast and Furious but lacking anything meaningful)