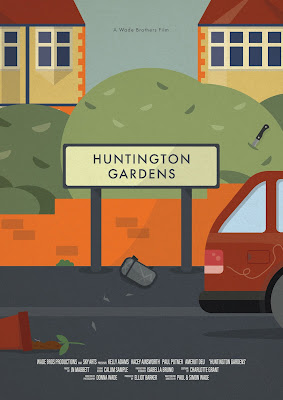 Into the heady mix of political and social breakdown that is Brexit comes a new short comedy film about a residential street in post-Brexit Britain, where the neighbours battle it out for the best parking spot.

Huntington Gardens brings the lives and parking dramas of three families, living on the same suburban street to the fore as each day they wage war over who gets the best parking spaces.

At the end of each workday, the Morris family, the Rogers and the Amins’ all drive back as quickly as they can to beat the others to the best spots on the street. Each family is from different economic, cultural and political backgrounds and their hidden prejudices bubble to the surface as the battle for parking spaces intensifies.

Who are these people? Well there’s the Morris family (remainers in the Brexit vote -predominantly directed by the articles read in the Guardian) Mrs Morris (Kelly Adams) is a stressed suburbanite.

Then there are Mr and Mrs Rogers played by Paul Putner and Kacey Ainsworth – a couple who have lived on 'Huntington Gardens' all of their lives, have seen people come and go and have seen it change a lot over the years, (leave voters in the Brexit vote due to reading an article on Facebook about EU regulations having a negative impact on the UK fishing industry and definitely not because of immigration…)

Also caught up in the parking madness is Mr Amin (Amerit Deu) – he didn’t vote in Brexit, as he was too busy with work; he thinks both sides are stupid. The Amin family moved into ‘Huntington Gardens’ five years ago and ever since they have been met with suspicion from the rest of the road. Their dislike of Mr Amin just reinforces his dislike of them and his stubbornness to get the best parking space, by whatever means. He’s not a person who likes small talk or general pleasantries, being quite direct and to the point.

The talented Directors – the Wade Brothers - said: “We wanted to capture the mixture of confusion, misplaced anger, frustration and mistrust of other people and create a film with all of those ideas and placed them on an average British, residential street, a street which hoses a mix of ethnicities, political beliefs and economic backgrounds. The battle for power, superiority and parking spaces amongst three families acting as a metaphor for post-Brexit Britain. “

Huntington Gardens is a clever and wonderfully shot laugh-out-loud piece of fun cinematic joy. It packs an engaging short story with a hard-hitting undercurrent of political comment. Inspired in no little part by the films of Shane Meadows stylistically, with references to other films such as Clockwise and the feel of many quality suburban dramas – the filmmakers manage to mix social realism with fully realised characters, believable environments, locations and highly charged emotions.

'Alls fair in love and parking?'

Highly recommended viewing however you voted!