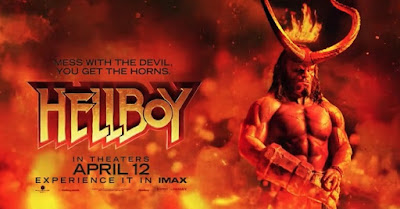 
“Why do you fight for those who hate and fear you?”

Here’s another half-backed reboot of a decent franchise which sullies the memory of the original two (can it really be 15 years since Guillermo del Toro first directed Ron Perlman in the lead?). So Mike Mignola’s graphic novel hero Hellboy – a demon who fights for the good of mankind is back on the big screen, but alas as mentioned this is not a glorious return.

Despite the ton of negative reviews, this film is soaking up, I was holding out some hope that Director Neil ‘Dog Soldiers’ Marshall’s effort might be at least a fun addition to the comic book sci-fi / hero genre. I was wrong. If there is a circle of hell set aside for terrible filmmakers, Marshall could well have bought himself a one-way ticket there for this scrappy, badly edited and altogether bungled embarrassment. 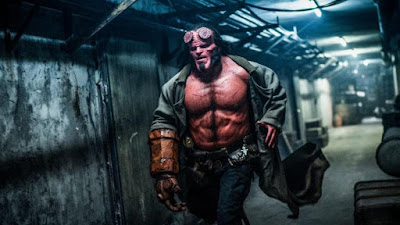 'big red in the house'

The plot sees Hellboy’s employer - the B.P.R.D. (an international non-governmental agency, who fight evil) - trying to halt Nimue, a witch who delights in the title ‘the Blood Queen’ (played with generic baddie style by Milla Jovovich). Nimue was last thwarted by King Arthur himself but is now plotting to come back from the dead and unleash a plague on mankind. Hellboy (David ‘Stranger Things’ Harbour) is dispatched to the UK to help stop her. He’s joined by a young seer named Sasha (Alice Monaghan) who speaks annoying ‘street’ like a wannabe grime artist and British special forces Major Ben Daimo (Daniel Dae Kim) who can transform into a very dodgy CGI cat creature.

The story jumps about throwing random enemies into the mix including giants running wild in the forests of England, a wrestling vampire and a weird and unnecessary visit to another dimension visiting the chicken-legged house where an evil called Baba Yaga resides. By the time the Arthur myth is dug up so that Hellboy has to find Merlin to help him too – most people will past caring – in fact several walked out of the screening I was in. 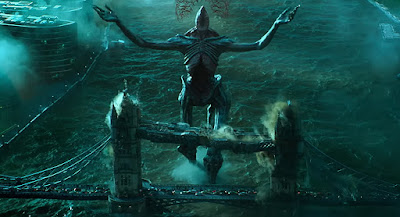 'London has gone to hell'


The fun elements of the original films have been traded in for excessive amounts of CGI gore – pretty much every character has to die in slo-mo explosions of blood – and the dialogue is butt cringingly ridiculous.

Harbour is probably the best thing about the film in the lead role but this demonic hero is given so little to work with that everything feels like a waste of time.

Hellboy is a terrible waste of time and effort.