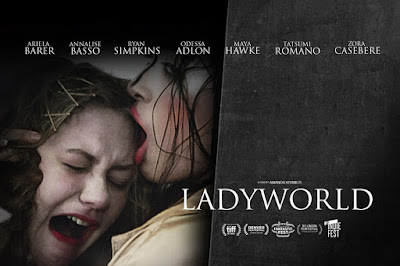 Agitated young women, trapped in a house with food supplies running dangerously low and sanity slipping away… This freaky new femme-em-up version of William Golding’s Lord of the Flies takes place in the grim aftermath of a birthday party.

Director Amanda Kramer goes all out with this freaky, arty drama that allows the actors to tap into their characters as the camera tracks their mental and physical disintegration. There is very little ‘plot’ so as to speak – just a psychological breakdown on a group scale as the damage to the apartment seals in the unfortunate females.

With little sign that rescue is on the way – and an unwillingness to try and ‘dig for freedom’ through the dirt outside – the rules of civilization collapse and a power struggle sees the girls split into two hostile groups. Underlying bigotry, fear and bitchiness surface as manipulation becomes the name of the game…

To make the situation worse there is a rumour that there is a ‘Man’ in the apartment somewhere. Seen by Eden (Atheena Frizzell) who later disappears – has she been attacked, or might she have found an escape route? 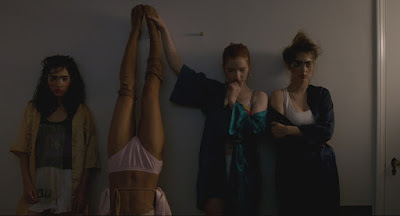 'Make your own entertainment'

The rest of the girls: Olivia (Ariela Barer), Dolly (Ryan Simpkins), Piper (Annalise Basso), Blake (Odessa Adlon), Romy (Maya Hawke), Amanda (Tatsumi Romano) and Mallory (Zora Casebere) are unsure. Delirium starts to seep into their minds, they become scared that this male interloper -thinking he must be a pervert looking to attack them. Things start to get potentially violent as the young women tool up with knives to fight off this literal ‘bogeyman’…

Overall Ladyworld is a strange film. The tiny budget means that all the heavy lifting is on the female cast, it doesn’t always pay off but there are flashes of inspiration. Speaking of which in places it has the feel of a low budget alternative Mean Girls – with much fewer laughs… 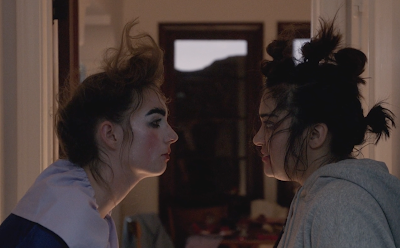 One for those looking to test themselves rather than seeking any sort of ‘entertainment’!?

Spiritual Enlightenment ööö - Do you really know the person next to you?
Posted by Matt Adcock at 3:17 pm