1917 - War is hell but sure looks incredible review 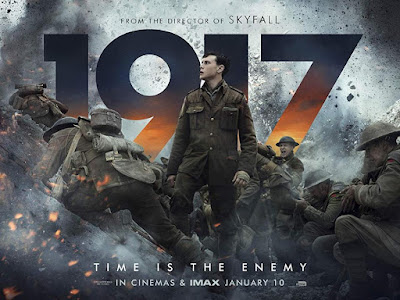 “They're walking into a trap. Your orders are to deliver a message calling off tomorrow mornings attack, if you fail, it will be a massacre…”

War is hell – and Sam ‘Skyfall’ Mendes certainly brings the full horror of World War 1 to the big screen in a truly cinematographic feast for the eyes. 1917 tells a tale he was passed on by his grandfather of two young soldiers on a vital mission to deliver a message that could possibly save thousands of allied troops.

What is truly stunning is that this exciting and devastating drama was filmed and edited as if it was one long take, with the camera tracking Lance Corporal’s Blake (Dean-Charles ‘Game of Thrones’ Chapman) and Schofield (George ‘Captain Fantastic’ MacKay), as they undertake a perilous gambit behind enemy lines.

The cinematography is staggering and whilst it is undoubtedly a harrowing tale, there is much to appreciate visually thanks to Roger ‘Blade Runner 2049’ Deakins' work. The mix of fear and adrenaline is visceral viewing as the camera travels a few inches above the dirt advancing with our two leads. Danger is everywhere and life is cheap as every enemy encounter is potentially fatal. 1917 doesn’t play like an action adventure, this is grittier and more savage, and all the more engaging for it.

It’s easy to see why 1917 took home two Golden Globes as it is without a doubt a technical masterpiece, giving us another glimpse at the horror and brutality of war – shot through with the cost of service and sacrifice. What the troops had to endure in the trenches is grimly writ large, even the other soldiers are a mix of shell-shocked and dispirited. The battle set pieces feel scarily realistic, this film will keep you on the edge of your seat to the heart-breaking conclusion. 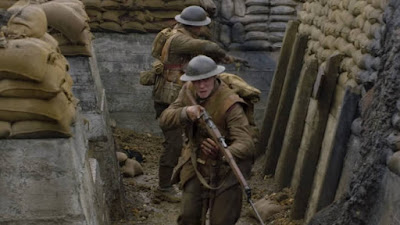 The cast are excellent, including quality support from the likes of Colin Firth, Benedict Cumberbatch and Mark Strong who bring gravitas to their small but key parts. The two leads are superbly believable in their desperate mission that will push them beyond what most could endure.
Mendes demonstrates a rare gift for being able to demonstrate how bravery is not a substitute for vulnerability but rather the ability to overcome fear and push forward anyway.

1917 might just be one of the best war movies of all time and an incredible piece of filmmaking that should be witnessed on the largest screen you can find.

(5 - Stunning vision of hell through a new lense)

Awesomeness ööööö – Powerful and heart-pounding throughout

Horror öööö – Nasty injuries throughout, plus death and peril