Matt feels the Color Out of Space (review) 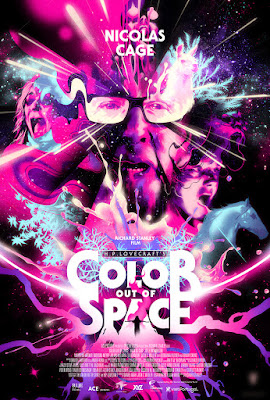 “Alpacas – the animal of the future…”

Director Richard ‘Dust Devil’ Stanley is a fascinating guy. After making the superb robo-terror flick Hardware and following up with an excellent supernatural serial killer in Dust Devil he got fired from the troubled H.G. Wells adaptation of The Island of Dr Moreau in 1996. He hasn’t made a film since. But now he’s back and he’s come back strong with a freak0ut sci-fi horror based on a weird short story by H.P. Lovecraft. 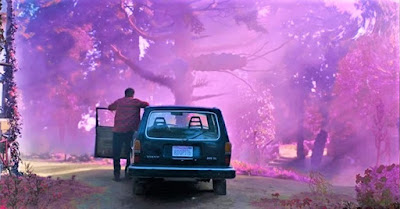 "a new kind of car advert?"

Color Out of Space is a cosmic tale of what happens when a meteor lands in the grounds of ex-artist Nathan Gardner (Nic ‘Mandy’ Cage)’s rural alpaca farm. The titular ‘Color’ is slowly unleashed and proves to be an extra-terrestrial organism that spreads madness and violence.

The results are a mash up of grisly body-horror and psych-out – shot through with laugh-out-loud humour. Basically, this is a perfect Friday night entertainment. I caught this at the gorgeous old-school London ‘Screen on the Green’ cinema and the crowd lapped it up whooping and cheering at the crazed on screen antics. Only getting a limited cinema run, this is a film to seek out on streaming channels or disc and watch with your favourite tipple in hand. 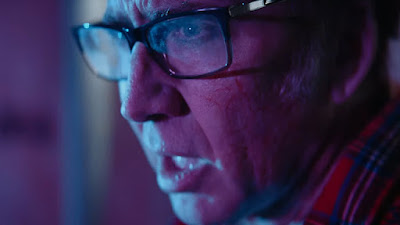 The sinister effects of the space color slowly permeate the farm - mutant flowers spring up, alien insects spawn, blood-like water drips from the taps and a very grotesque tribute to ‘The Thing’ but with alpacas rather than dogs happens in the barn.

Cage leads the line for humanity as only he can. His bug-eyed patented crazed look was made for plots like this. He’s given great support from Joely Richardson who plays his wife and especially Madeleine Arthur as his daughter who thinks pagan rites might ward off the alien color.
Probably not for those of a sensitive disposition, or anyone who really doesn’t like sci-fi weirdness.

I found Color out of Space however to be a stone-cold cult classic that really delivers on the slimy dread. It’s been said that Lovecraft’s tales are pretty much ‘unfillable’ – and this one in particularly as it has descriptions like ‘It was just a colour out of space - a frightful messenger from unformed realms of infinity beyond all nature as we know it’ but Stanley has somehow pulled it off in style.