Matt enjoys the fishy goings on FROM THE DEEP (Review) 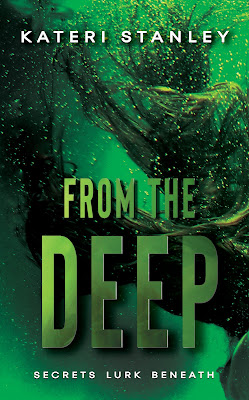 “Ian breathes out, water races into his lungs like a tidal wave, suffocating him. He remembers seaweed circling his head and a pair of large, piercing eyes glaring back before the darkness finally engulfs him.”

Not everything that comes from the sea means us well… Meet Julian Finch, a widower and fisherman, when he learns that the bodies of two colleagues have washed up on the beach of Drake Cove it begins a mystery that will change more than just his life.

The controversial tradition called "The Culling" - the annual slaughter of pilot whales for consumption is an act that divides the nation. Might it be enough to drive an extreme animal rights group - the Fighters Against Animal Cruelty (FAAC) - to murder? These animal ‘lovers’ have form for harassing the small fishing town for many years, smashing up their boats and sending vicious hate mail but murder?

Things get spicy when a viral video is uploaded by the FAAC of Julian killing a pregnant whale - it causes uproar online and makes Julian the victim of hate crime. In order to avoid further life-threatening attacks, Julian and his daughter take refuge in the home of Frank Blothio: ex-fisherman turned writer and political activist who does not have the best history with the animal rights movement, or Drake Cove as a whole.

As Julian integrates into the Blothio way of life, he discovers heinous secrets and disturbing truths lurking beneath the skin of his hometown that will change his life forever.

This is the tale that brings contemporary new life to the sea-based mythos and doesn’t flinch from depictions of violence, sexual scenes (including one to rival The Lighthouse) and much f*#king bad language.

Stanley writes with an eager energy that drags you along even if the plot is a bit muddled. This wouldn’t normally be a book I’d seek out but it came to my attention as it’s published by the same publisher as my Complete Darkness and I’m glad I gave it a go.

From The Deep is an engagingly fishy romp that delivers a fun time for readers who enjoy a mix of fantasy and real-world mash-up.

I had the pleasure of putting some questions to Kat - here's what she said:

Matt: If scientists ever managed to create a giant mecha version of you – who or what would be your nemesis?

Kat: Something underwater like a shark or something snake-like, not a fan of them. Or something radioactive.

Matt: What is the most disturbing fictional scene you’ve ever read or watched in a book/film of any genre?

Kat: There was a scene from a novel called Still Missing by Chevy Stevens that made me feel physically sick. Annie, a real estate agent is kidnapped from an open house event by a deeply disturbed man who she nicknames as The Freak. It’s a heavy novel and the scene depicts the kidnapper forcing her to eat food when she’s too frightened to do so. It’s was very upsetting and I had to have a break from reading.

Matt: If you were hired to throw a parade of any scale or theme through the centre of London what type of parade would it be?

Kat:  Appreciation of the arts. Writing. Film. Literature. Theatre. Dance. Music. Painting and so much more. That would be pretty great. I can imagine a huge crowd turning up for that.

Matt: You’re in a strange town with £100,000 that you have to spend in a single evening – talk me through what you get up to…

Kat: Rent out a HUGE cinema with the boyfriend and my family. There would be reclining chairs, we could have as much junk food and drink as we like and watch as many movies and TV shows as we like.

Matt: Who inspires you most (can be living or dead)?

Kat:  Everything does. The people around me. Good and bad experiences. Music. Movies. Tv shows. Documentaries. And some of my characters are pretty awesome inspiring people too.

Matt: There’s a masked assailant with a gun to your head, who is most likely to be under the mask?

Kat: Probably a robber or if magic existed, a character of mine who is majorly pissed at their development or what happened to them.

Matt: What is the meaning of life?

Kat: I was so tempted to launch into my Hitch Hiker’s Guide to the Galaxy knowledge and say 42…

Matt: What was the best gift you’ve ever been given?

Kat: I have a wonderful family, lovely friends and a gorgeous boyfriend. That’s a pretty good gift.

Matt: If you could have a sidekick robot – what would it be able to do for you?

Kat: Whenever I do long-distance walking, if I get tired. My robot can carry me up a huge hill while I get my breath back. That’d be nice.

Matt: What would you like written on your tombstone?

Kat: I haven’t thought about my death yet. Nothing cheesy or predictable.

Kat: If you’re into thrillers and modern-day issues such as whaling and climate change, check out my novel, From the Deep. Certain scenes in the novel are loosely based on the real-life events of the Grindarap, a cultural practice from the Faroe Islands where pilot whales are slaughtered and the documented cases of Japanese ships and fishermen killing whales and dolphins for food and pharmaceuticals.

Click below to find out in my dark sci-fi novel...