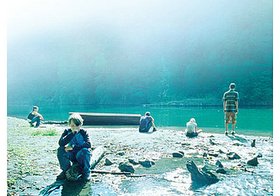 But they won’t of course – they won’t because big fat bullyboy George ‘and his mind of zillion things’ is dead meat. The only things in his mind now are worms and bugs…want to know why? Take a trip to Mean Creek on DVD… it’s a twisted little coming of age tale that is also kinda beautiful and for once it’s acted by kids who can actually act!?

The ‘death in a group of teens’ storyline isn’t exactly original but having said that it’s rarely been brought to the screen with such earnest conviction and downright skill. Beneath the surface, everyone has a secret…and this talent bunch of kids manage to walk the fast blurring line between innocence, guilt and responsibility in a convincingly watchable way.

So we meet Sam (Rory Culkin), he gets beaten up by nasty / misunderstood George (Josh Peck), the overweight school bully. Sam’s older brother Rocky (Trevor Morgan), and his friends Marty (Scott Mechlowicz) and Clyde (Ryan Kelley) decide to teach George a lesson – a lesson in being humiliated… I won’t go into the plot any further but you’ll get the gist from the title that things turn out rather more macabre than anticipated – leading to a hasty round of soul searching and regret in the final act…

Star of the piece for me was young Millie (Carly Schroeder), Sam’s would-be girlfriend, she’s amazingly assured and manages to balance the raging testosterone from the rest of the all male group with a cute brand of blank acceptance mixed with knowing undercurrents. She’ll be major star soon mark my words – Dakota Fanning should be worried as her ‘wide eyed young blonde girl’ acting crown could well be in serious jeopardy!

Mean Creek is film that needs to be seen by teens and parents alike – powerful, intense and lingeringly poignant, I await with interest to see what Estes does next.