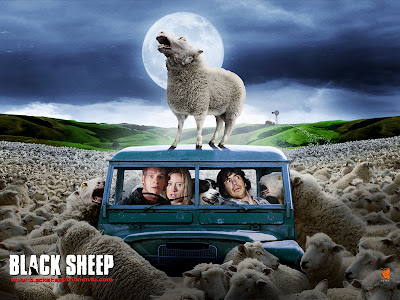 Baa baa black sheep, have you any wool?
Yes sir, yes sir – three bags full,
but I’ll rip your throat out and munch on your insides before you get your damned hands on it!!

Prepare to witness the ‘Violence of the Lambs’ in this new horror comedy where hills are alive with rampant killer sheep (yes you read that right). Black Sheep is the happy tale of Henry Oldfield (Nathan Meister) who manages to overcome his debilitating terror of sheep and return to his family’s farm in order to sell his share in it. But all is not right because his brother Angus has instigated a reckless ‘super sheep’ genetic engineering programme which has the unfortunate side effect of turning the once peace loving ovine grass munchers into flesh craving mutant nightmares.

Writer / Director Jonathan King has created a madcap, vegetarian’s worst nightmare writ large which drips gore and laughs in equal measure. The thousands of sheep are the stars with their eerie blank eyes, cloven hooves and newly acquired taste for humans – these are woollen predators that mean business. New Zealand’s gorgeous rolling pastures are put to good use as the picturesque backdrop to the humans vs sheep carnage and the Antipodean connect continues through the use of Peter Jackson’s WETA workshop who supply the grizzly special effects.

The cast go about the very silly plot with plenty of gusto – which features freakiness like being sexually assault by a ram, horrifically turning into ‘were-sheep’ and of course much running away from the bloodthirsty flock. A love interest for reluctant hero Henry is injected through a ditzy environmentalist named Experience (Danielle Mason) – so you could almost say this is a date movie, it really depends on what ewe want from an evening out I suppose…

The director assures us that ‘no sheep were harmed in the making of the film’ but he goes on to say ‘though I must say there were days when I wanted to!’
Overall this is promising debut from King and it will be interesting to see where he goes from here.
Black Sheep could well be described as this year’s ‘shorn of the dead’ such is the gleefully macabre action on offer. You might say ‘baa humbug’ but I assure you that you won’t see a better mutant killer sheep film this year!

Out of 5 you have to go with a much better than expected 3.5 (Mutton dressed as lamb but tasty chops anyway!!)...

Action ööö – Bleatings a plenty
Laughs ööö – Lots of wooly fun
Horror ööö – Make sure your finish your popcorn early on!
Babes öö – Unless ewe look at sheep 'that' way 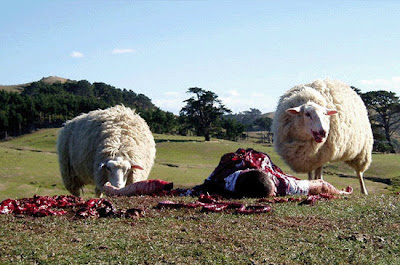