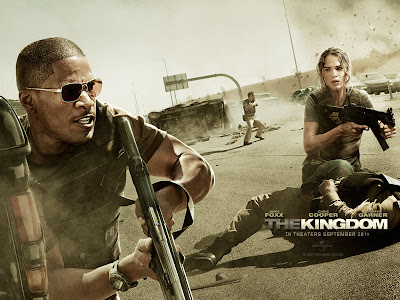 Cut to the interior of a claustrophobic run down apartment block somewhere in Saudi Arabia (which is the ‘Kingdom’ of the title). The tension is off the scale as special FBI agent Ronald Fleury (Janie Foxx) crouches outside a door behind which the terrorist cell responsible for murdering hundreds of innocent American civilians might be waiting. He turns to the only back up he has – a local police Colonel who has been assigned to help Fleury’s investigation. As they prepare to burst into the room and possible death, Fleury asks “Which side do you think Allah's on?” The Colonel without missing a beat replies: “We are about to find out!”
This scene sums up The Kingdom completely – a rousing battle cry for the ongoing gung ho U.S. ‘war on terror’, complete with a peek into the limited understanding about the full religious and cultural issues at stake.
Director Peter ‘Very Bad Things’ Berg aims for maximum edgy nightmare ‘what if’ real world paranoia with this piece of fantasy confrontation and culture clash. He is reunited with the gorgeous Jennifer Garner (who he acted alongside briefly in the TV show Alias), and The Kingdom almost comes across as big screen spin off of that high concept U.S. agents saving the world show.
Foxx puts in some good work as agent Fleury, who is very much in the mould of last year’s Tubbs from Miami Vice. His small team which includes the Chris Cooper (explosives), Jennifer Garner (forensics) and Jason Bateman (intelligence) – are given five days to identify and take down the extremists who are believed to still be in the Kingdom.
The slow build up which packs a high ‘cliché per minute’ ratio and isn’t as gritty or authentic as it thinks it is, but it works in a simplistic way only to ramp up to an incredible kick-ass finale. The Kingdom is a film for those who want to have their irresolvable cultural conflict issues painted by numbers in broad strokes and then go home having witnessed justice being served with extreme prejudice.
It’s super slick and morally dubious in equal measure – but it sure does deliver in the action stakes. The last 20 minutes are possibly the most exciting I’ve witnessed in the cinema this year but then I’m a sucker for tasty cinematic gunplay, oh, and Jennifer Garner!? 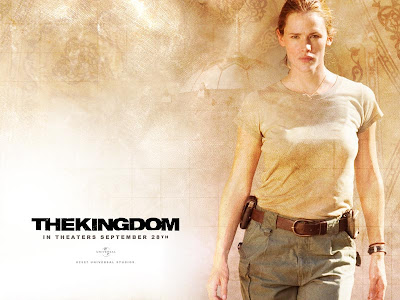 "Garner - looks good in anything, even FBI issue fatigues"

More of my semi obsession with Jennifer G: http://darkmatt.blogspot.com/2005/01/jennifer-garner-great-looking-but.html

Or some such more professional and sensible conversation before an attack.

If this is the best dialog moment in the movie, I think I'll skip it.