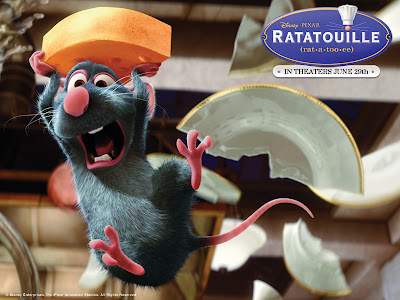 
A massive filthy disease ridden vermin infestation has been reported in cinemas this week across the country. Nowhere is safe from this plague carrying pestilence and what is more shocking is that it seems that mostly children are coming face to face with this mass of furry rodents. The upside however is that the only symptoms being exhibited after exposure to the infected cinema screens are laughter, genuine enjoyment and some good life lessons being learnt.
Pixar have done something amazing with Ratatouille – made rats fun, loveable little heroes on a par with superheroes, cars and toys… I probably don’t need to tell you about the genius CGI animation that sets new standards of eye-popping detail, or the excellent voice acting that really brings depth and emotional attachment to the characters. Pixar have created a gold standard in these departments and Ratatouille doesn’t disappoint, but where this film really shines is that it delivers a decent story, neither overly moralising pap, cheap sequel cash in or an obvious excuse to try and sell tie-in merchandise.
This is the tail, sorry tale, of a young rat named Remy (voiced by Patton Oswalt) who is blessed with taste buds beyond his scavenger station in life. Being a rat who can appreciate fine food over literal garbage leads him into many gastronomic adventures after he is separated from his family. One unlikely thing leads to another to set up the fun plot twist of Remy finding himself in the kitchen of a famous Parisian restaurant helping a good-hearted young lad named Linguini cook up a storm. But can the man / rat team overcome the obstacles of health inspectors, nasty superiors and scary food critics?
It’s unlikely and completely far-fetched but somehow you won’t hold that against the film as all the ingredients of this gently comic tale work together to make a deliciously fun distraction for kids and adults alike.
Both my sons (6 and 10 years old) really enjoyed Ratatouille, telling me that it was ‘coolest animated film this year’ – after witnessing the likes of the mediocre Shrek 3, I think the quality original story making resonated with them.
As opinionated top food critic Anton Ego puts it in the movie: ‘The bitter truth we critics must face is that, in the grand scheme of things, the average piece of junk is more meaningful than our criticism designating it so.’ Ratatoulille I’m delighted to say is not ‘junk’, so hats off to the big cheeses at Pixar, long may they keep infesting our cinemas!

Overall öööö (this is not just food, this is PIXAR food)