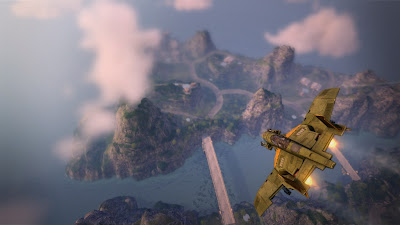 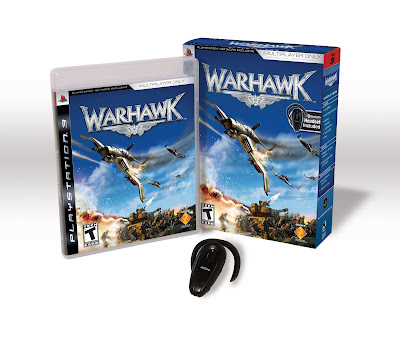 "On March 3, 1969 the United States Navy established an elite school for the top one percent of its pilots. Its purpose was to teach the lost art of aerial combat and to insure that the handful of men who graduated were the best fighter pilots in the world.
They succeeded. Today, the Navy calls it Fighter Weapons School. The flyers call it: Warhawk, err, sorry - TOP GUN."

There is a unique feeling that only gamers who have experienced the all out thrill of a no holds barred Warhawk death match against 31 other tooled up killers have felt… It’s a primal, hair raising, endorphin rush – adrenalin overloading your sensory perception, your reflexes heightened and a wild animal bloodlust pounding through your veins… All around you bullets fly, rockets whiz and grenades explode, tanks are pounding the area with their heavy shells, jeeps rake your position with machinegun fire, then from nowhere comes the fearsome sight of a WarHawk jump jet coming over the rise, before you can react there are ground to air missiles being launched at you backed up by large calibre chain gun fire. You’re blown into the air from the multiple impacts – a warrior’s death, a noble way to go – but just another point to the pilot of the Warhawk!

I’m not kidding when I tell you that WarHawk is the future of multiplayer online warfare. It all looks stunning from the air or the ground, run, drive or soar across the various battlefields the words ‘jaw dropping’ do not adequately convey the sheer wonder of the graphics which boasts unprecedented draw distances and gorgeously violent battle effects.Freedom is the name of the game – you can play it however you want, take a mate or two or three online with you in cool split screen action. Or go for glory alone in a ranked game and reap the benefits of rank progression, which allows for new options of customisation to open up – for example if you fancy fighting in a Viking helmet, it’s there to be unlocked… The PS3 has been in need of a decent companion to Resistance Fall of Man’s online shooting antics and Warhawk delivers the best multiplayer shoot ‘em up fun yet.

Warhawk is a multiplayer only game but it wasn’t always that way, there was going to be a single player campaign but when it looked a bit sub par – Incongnito took the bold decision to go all out on the making the online game experience the best ever. And it is very impressive, even with masses of players in different vehicles all going at I’ve not noticed any lag. The weapon list is currently basic pistol, knife, grenades, assault rifle, sniper rifle, mines and the always-good rocket launcher. Warhawks have their own air to air and air to ground weapons power ups – plus a sneaky invisibility and useful chaff option. modes. Death Match, Team Death Match, Capture the Flag, Zones and Dogfights – those are the your options.

If you’re at all a fan of shooting, flying or just blowing things up – you need Warhawk in your life. More maps, vehicles and weapons are coming in the form of downloadable content via PSN – which will give the already highly addictive game an even longer lifespan. 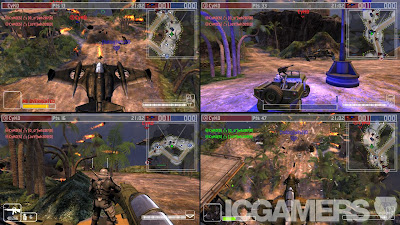 "take your mates online with you on a single PS3!"