Horton Hears a Who! - reviewho 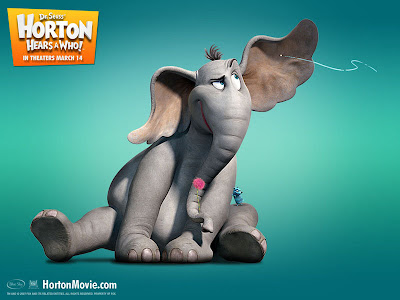 A new (if somewhat unlikely) cinematic hero has emerged – charged with the power to defend a whole planet from destruction. He’s big, he’s grey and he’s very dependable is his middle name – most people just know him as Horton however. If you’re a fan of Dr Seuss then you’ll likely already know Horton from his book adventures ‘Horton Hatches the Egg’ or this fun tale ‘Horton Hears a Who!’

And so it is that on the fifteenth of May in the Jungle of Nool, in the heat of the day, in the cool of the pool. He was splashing...enjoying the jungle's great joys...When Horton the elephant heard a small noise. The noise turns out to be coming from a small speck of dust – a speck inhabited by a population of erm, what rhymes with dust? Oh, nevermind, I’ll leave the ryhming to Dr Seuss and the quality filmmaking to Blue Sky Studios – makers of the engaging Ice Age flicks and now this Seusstastic big screen outing.

Jim Carrey (who has Suess form having been The Grinch) lends his voice to Horton and manages to bring just enough of his madcap energy to the role. Also on hand is fellow wackyman Steve Carrell as there mayor of Who-Ville, the town on the speck that Horton finds. Too small to be seen, the only chance of survival for the Whos is their unlikely ally Horton whose enormous ears pick up their noise and prompts him to believe in their existence.

The tiny town of Who-Ville is in danger however from a mean spirited kangaroo (Carol Burnett) who says that it’s crazy to believe in anything that you can’t actually see, hhmmm, I have some friends of that opinion. Anyway, she employs the dastardly Vlad Vladikoff (Will Arnett) – an eagle with villianous interntions backed up by an army of madcap monkeys to take out the speck and cage Horton for his wacky notions.

The book might take barely 10 minutes to read but the film doesn’t outstay it’s welcome and manages to pack in something for everyone – even an anime action scene in which Horton shows us his heroic side.

To compliment a quality Easter entertainment package as well as seeing Horton, can I also recommend a vibrant new musical retelling of the Gospel story in Godspell, which you can catch at Stopsley Baptist Church in Luton (Fri – Sunday)?

Liable to make you:
"investigate every dust speck you come across for sentient lifeforms"

DM Poster Quote:
“A person is a person no matter how small - a film can be great Seuss'll have in thrall"

HORTON HEARS A WHO - DARKMATTERS COMPETITION COMING THIS WEEK!