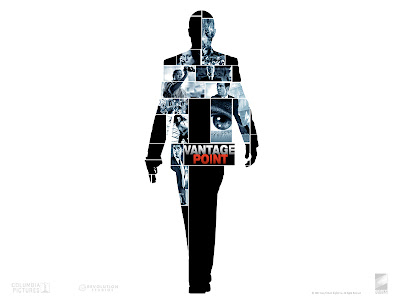 They say that you can’t believe everything you see and that is certainly the case with Vantage Point, a thriller movie that plays fast and loose with your senses. In fact I found it very hard to believe pretty much anything presented in this slick but vacuous tale where the shooting of the US present is drip fed to viewers through the ‘vantage points’ of the several different characters.
We get to see the same 15 or so minutes over and over again, each time with some new details added - it sounds like an interesting idea but in practice the gimmick becomes tired very quickly.
Main protagonist is world-weary secret service agent (Dennis Quaid – the poor man’s Harrison Ford), who is unlucky enough to be on active presidential protection duty for the first time since taking a bullet for the world leader barely a year before. Then there’s a hard-nosed TV producer (Sigourney Weaver) who witnesses events through the cameras she has covering the world anti-terrorism summit where the assassination occurs. Another point of view comes from horse’s mouth so as to speak as President Ashton (William Hurt) presents his version of events. Of course all is not what it seems and it unfortunately falls to the least convincing of the viewpoints to tenuously tie it all together – step up Oscar winner Forest Whitaker. Quite what Whitaker thinks he’s doing here is anybody’s guess – he plays a camcorder happy tourist who dashes about the place handily filming everything with a demented look of incomprehension etched on his face.
There are some decent scenes including an impressive car chase and brutal lone gunman assault on the presidential guard, but they are interspersed with so much dull re-treading of the same situation that it’s hard to recommend this as anything other than a flawed attempt to try something a little bit different.
Oh and back to Whitaker – there are scenes where he has to run randomly from key event to key event but without being unkind, he’s not really built for anything more athletic than eating burgers and people in the audience were laughing out loud at his confused sweaty antics.
Amazingly, Vantage Point isn’t the worst film on offer at the moment – that dubious honour goes to Diary of the Dead which sets a new all time low for zombie flicks and that’s really saying something!

Comedic Value: öööööö (6)
- There are a couple of insanely funny scenes (unintentionally of course)

Arbitrary final rating: ööööö (5)
- There's more than one way to look at this but none of them are going to make it better film

Liable to make you:
"Think that Forest Whitaker is a bit of a cock"

DM Poster Quote:
“You might want to see this from the Vantage Point of your sofa (on DVD)"

Second Opinion from Tom Wade (who I had the errr, 'pleasure' of witnessing this with): http://tomwade.blogspot.com/2008/03/wheres-my-vantage-point.html

If you gave this 5, 6 and 7s out of 10, I'd hate to see a movie you gave less to! We saw it last week and, just like you say, the whole audience were laughing at it. Nice idea, shame about the actual film!

Hey my dear Rach - you have to look at the ratings...

6 for the unintentional comedy

7 for 'mind blight' shows that it ain't no classic!!

hope that helps - if I review Diary of the Dead then you'll see some real low scores!!

Yes for the link! When I'm finally as famous as you I'll only have you to thank.

Although where is your Cottage review? I remember in the old days it would have been up by now...

Want me to take over the newspaper job?!