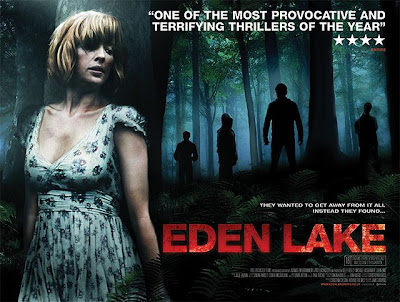 If you go down to the woods today, watch out for the chav hoodies from hell (or Eden Lake at least) because these kids don’t play nice. In fact James Watkins’ new gruelling British chiller is enough to promote widespread Paedophobia - the fear of children - because as any Daily Mail reader will tell you, they’re just waiting to pounce if you so much as look at them wrong.
Eden Lake tells the unhappy but culturally savvy tale of a sweet couple on the brink of getting engaged who get more than they could possibly imagine when they confront a group of rowdy teenagers. Jenny (the excellent Kelly Reilly) is a stereotypically lovely primary school teacher who goes away for a romantic weekend with her nice boyfriend Steve (Michael ‘300’ Fassbender). There is an eerie sense of impending doom from the very start, cleverly built up in a style that makes this feel like an English Countryside Chainsaw Massacre – just with knifes instead of chainsaws. An effective feeling of menace is created by the couple’s first encounters with the unfriendly and uncouth locals in the Bed and Breakfast they stay in en route to Eden Lake – a picturesque lakeside beauty spot scheduled for development into new gated community of luxury housing. 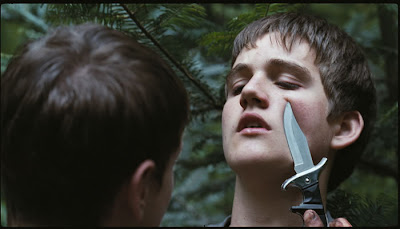 What starts out as an unfortunate run in with head boy Brett (Jack O'Connell), his Rottweiler and gang of aggressive, foul-mouthed pals soon becomes a nightmare of unthinkable violence. Before you can say ‘I don’t like the look of those kids’ Steve and Jenny find themselves the prey in a deadly game of cat and mouse. The tension is kept strong and the violence that ensues is a bleakly possible ‘what if’ where decent adults are terrorised by feral youth which include the talented young Thomas ‘This is England’ Turgoose.
There is likely to be a media storm around this hard hitting, turbo charged horror which explores issues such as how the social fabric of Britain has been broken to the point where parents raise children who have absolutely no moral compass. There are images in Eden Lake that will stay with you long after the credits roll including the sight of the gangs’ token female impassively filming the torture of one of the couple on her mobile.
Parent or not, you’ll be urging the heroes on even when they have to resort to deadly violence themselves in order to try and survive. Oh, and if you think the kids are rotters, just wait till you meet the parents!! 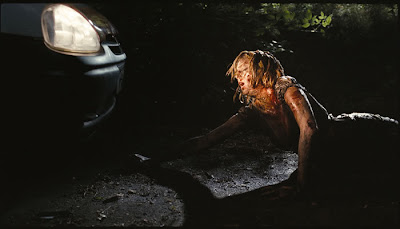 Endorphin Stimulation: ööööööööö (9)
+ Grips like a beartrap to the neck

Tasty 'sick' Action: öööööööö (8)
+ Damn this is hard horror action - not for the nervous

Gratuitous Babeness: öööööööö (8)
+ Kelly Reilly is hot, even covered in mud and blood...

Mind Blight / Boredom: öööö (4)
+ Cracks along, with shocks at every turn, not least the haunting ending

Comedic Value: öööööö (6)
+ The humour at the start runs dry as the horror escalates

Liable to make you:
"beat the next hoodie you meet to a pulp 'just in case'"