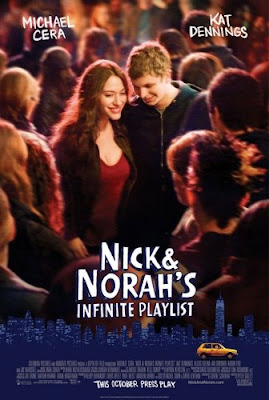 Nick and Norah's Infinite Playlist (12a)

Listen up hipsters the "movement" has gone mainstream.

Your clique has been blown open by Peter Sollett in Nick and Norah's Infinite Playlist which shines the full glare of Hollywood on the 'oh-so-cool' culture of Manhattan's indie music kids. And for old timers like me it is a refreshing info burst of cool that wraps a charming love story around a wafer thin plot about obscure bands and wannabe rockers.Michael ' Juno and Superbad' Cera is Nick, the only straight member of gay indie band rejoicing in the name 'The Jerk Offs'. He's still smarting from being dumped by his dream woman Tris (Alexis 'Havoc' Dziena) when his well meaning band mates attempt to set him up with the super hip and generally lovely Norah (Kat 'Charlie Bartlett' Dennings). One thing conveniently leads to another and the night becomes a romantic odyssey of will they won't they get together as the newbie potential couple hunt down their favourite underground band 'Fluffy' who are doing a secret gig somewhere in town. Comic relief is provided by Nick's band mates Thom (Aaron Yoo), Dev (Rafi Gavron) and Lothario (Jonathan B. Wright) whose attempt to give Norah's drunken party girl pal Caroline a ride home only for her to think she's being kidnapped and go AWOL. Nick and Norah's Infinite Playlist could have been a vacuous waste of time and effort but he two leads have good chemistry, the supporting cast do their job well and the depiction of the musical subculture of kids who are only interested in knowing about the next cool band feels authentic. It also makes up for the fairly predictable plot by having some zinging dialogue - my pick being when the befuddled Caroline happens upon a religious show, phones Norah and says "I found Jesus!" Norah replies "what?" and Caroline continues "Jesus! He's much taller in person..."

So can real love be found by a compatibility forged in the heat of mix CDs and late night hangouts? 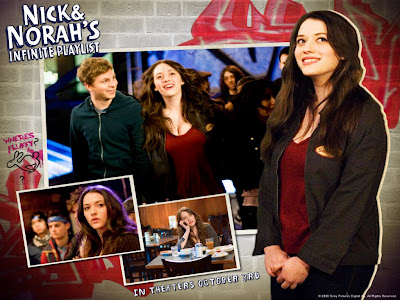 Take a ride with Nick and Norah - it's a fun way to find out!

+ Quirky enough and cool too - charming and fun, a strong look at youth culture...