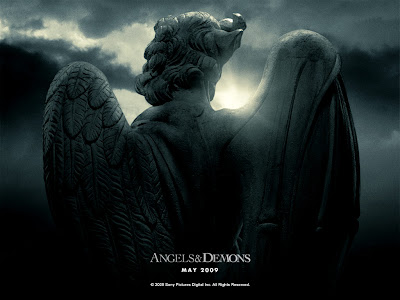 Reader I urge you to take heed of the ancient legend hidden in Dan Brown’s Da Vinci Code prequel Angels & Demons (now reworked to be a cash-in sequel film)… It states simply ‘So dull the Ron of Ham’, I asked a learned professor friend what this could mean and the results were devastating. In simple terms it apparently refers to cinematic return of Ron ‘Far and Away’ Howard with a film so bloated, turgid and mind achingly average that it has awoken the attentions of a secret underground cult known as the Cinluminati. Their members are fiendish visual thrill seekers who stand up for exciting cinema and are willing to unleash unspeakable reprisals on perpetrators of lame big screen ‘blockbusters’.

Step up Angels & Demons, another ‘excitement-lite’ plodathon which sees Harvard symbologist Robert Langdon (Tom Hanks – whose charisma is missing in action as per The Da Vinci Code) stumbling around Vatican City trying to foil a bombing. Sure it all looks good enough with an impressive fully CGI large scale Vatican set, nicely shot famous Roman landmarks and even a inside tour of the infamous Large Hadron Collider machine. But somehow what could have been an engaging thriller, manages to fumble its interesting ‘plot to kill the Pope and his most likely replacements’, leaving viewers yawning.

Ewan McGregor adds to the distinct whiff of cheese in the proceedings by hamming it up as Camerlengo Patrick McKenna – a devout priest who has helicopter piloting and stunt parachuting skills – hhmm, d’you think they might come in somewhere?
Hanks’ Langdon is accompanied through this misadventure by anti-matter scientist Vittoria (Ayelet ‘Vantage Point’ Zurer), who takes the thankless sidekick role of asking questions that require masses of mumbo jumbo exposition at every turn.

Alas there’s only so much watching of clue solving that a mere mortal can stand and Angels & Demons exceeds the recommended safe levels by some margin. If contemplating seeing this you might want to put in a spot of training – maybe try watching a smug looking stranger doing a Sudoku or something? 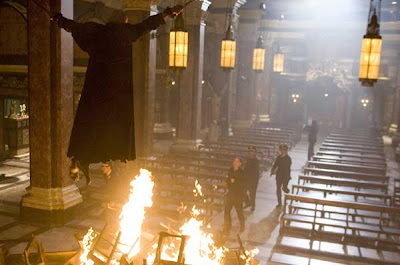 You can’t really blame the film makers for knocking this ‘Brown stuff’ out though because stupidly large numbers of people will probably turn up see if Angels & Demons is any better than The Da Vinci Code. The fact that it is only a marginally more engaging waste of over two hours leaves you wondering if cinema’s least exciting action hero might return for a third outing – heaven help us all.

Not convinced? check out this review of the film over at The Telegraph whose Tim Robey says:
“Hanks remains chipper to the point of blasé here, but the various suspenseful pickles he gets himself into don't confer much dignity on the character. In one sequence, trapped without oxygen in an airtight archive chamber, he must climb a shelf of clue-packed manuscripts and awkwardly topple it using his body weight.”
Posted by Matt Adcock at 10:19 pm

Email ThisBlogThis!Share to TwitterShare to FacebookShare to Pinterest
Labels: angels and demons, ron howard ate another two hours of my life, tom hanks