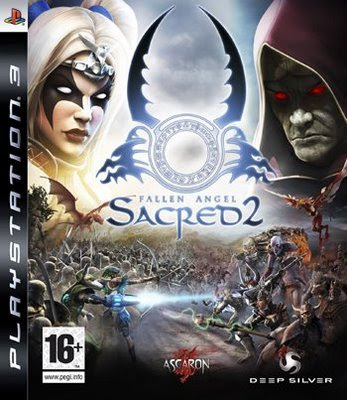 There are some itches that can only be scratched with a massive battle sword… Sacred 2 is the a new hack n slash RPG which gives a great Diablo vibe – which basically means that if you like running around fighting all sorts of creatures, righting wrongs and saving the day, you’re in luck!
Here’s the drill: step up, create a character, choose a god to worship (well the game is called ‘Sacred’) and pick a path – light or dark. There are six character classes to choose from including the rather sexy Seraphim (see screenshot / artwork), a not so ‘Lord of the Rings knock off’ High Elf, generic Dryad, interesting part robo Temple Guardian, devious Shadow Warrior or evil incarnate Inquisitor. What you can’t do is customise them much other than hair colour / couple of clothing choices.

Sacred 2 is all about killing stuff, we’re talking thousands of enemies great and small – picking up the loot they drop, buying better equipment and generally levelling up like there’s no tomorrow… You shouldn’t worry too much about the plot – energy is being mischiefed, you have a massive list of quests – and hundreds of side quests too. It all boils along at a good rate, there’s never a dull moment…The gameplay world is huge, and you can spend hours just wandering about getting into fights even if not following the main quests. It’s highly addictive stuff for anyone whose ever enjoyed a some battle focused adventuring.

The various characters do play differently (and there are character specific trophies to be earned) so I found myself hard pressed to decide which to make my main character for a whole play through. Levelling up works well with good new skills to be tried out. Stat management sees you spreading the love between weapon skills, character attributes such as speed or health regeneration etc. Before long you’ll be a potent ass kicker – but then the joy is that there’s always something bigger and nastier waiting for you out there…

"does my bum look big in this angel armour?"

You can of course call upon your chosen god to deliver their smart weapon at various points – these are great ‘nuke’ or ‘super-heal’ style powers that can help in taking out bosses etc. There are useful things to spend your hard looted loot on too – character specific mounts can be purchased and serve to make you into a cavalry adventurer with better offensive capability.

The controls work really well – Sacred 2 makes use of clever triggers mapping various combinations, which stop the usual whinging about ‘why can’t we use ‘mouse and keyboard?’ There is some top multiplayer action to be had too (upgraded from the PC version of the game) and it is seamlessly integrated using the PlayStation Network. Even when playing with yourself ‘ahem’, there is an option to let other players drop in and out at will when you're online. I found that it wasn’t long before I was adventuring with mates both co-operatively and then in a spot of competitive play.

Graphically the PS3 version is a good looking game, yes there are occasional frame issues but Sacred 2 sets a new benchmark for the this style of game, easily trumping current competitors like Untold Legends. The enemies are nicely detailed and each type has a variety of looks – so you’re likely to be zooming in to check out the different appearances. And they are even blessed with some personality… In an absolutely genius move the creators have given their minions lines like ‘I knew it, I was just an extra’, even the dead have fun to offer on their gravestones – I noted the still open grave marked ‘for reviewers’!? Soundtrack wise we’re talking heavy thumping tunes from the likes of Blind Guardian.

At the moment there really isn’t anything to touch Sacred 2 for addictive chop-shoot-or-magic-em-up through many many hours of fantasy adventuring with or without pals… Bring it!!

Darkmatters final rating of: öööööööö (8 - if you like adventuring you need this game) 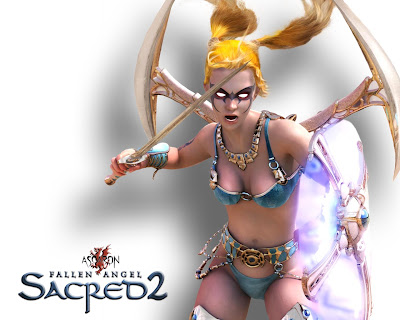 "angels in bikinis? well, they are fallen angels..."