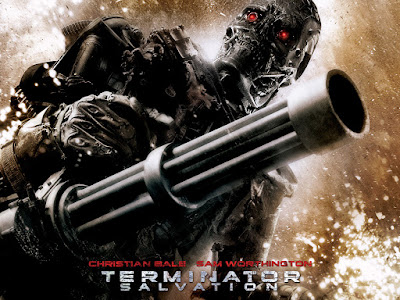 “I knew it. I knew it was coming. But this is not the future my mother warned me about. And in this future, I don't know if we can win this war. This is John Connor.”

Yes the human resistance of the near future finds itself in dire straits once again at the hands of those pesky computer controlled robots we know as ‘terminators’… The battle has changed, we’re now in 2018 – post the ‘judgement day’ nuclear strike and hero John Connor (now Christian ‘The Dark Knight’ Bale) is trying to live up to his ‘saviour of mankind’ prediction. Enemy computer system Skynet has given up trying to wipe out the last of the humans by sending terminators back in time, so it decides to win the war against us by going after the hero of the first film Kyle Reese (Anton Yelchin) while he’s still a grumpy teen. There is of course an obligatory Terminator who thinks he’s human in the form of Marcus (Sam Worthington), he might just hold the key to mankind’s safety or extermination… Yawn…

The technology on offer in Terminator Salvation isn’t as advanced as in T2, so don’t go expecting any morphing liquid metal hi-jinks. The machines here are actually more Transformer like prototypes – here’s a house sized giant robot!? Ohh look out for the motorcycle shaped speeder terminators etc etc… This makes for a few ‘wow’ CGI battles but takes something away from the general motive of the series so far, which was always been about a battle of wits between advance human form terminators and Connor at one age or another.

Terminator Salvation does deliver lots of vacant wham bam action, but even this is low on actual death due to the family friendly age rating - which also means that the terminators now don’t include expletives in their list of possible responses. What is most sorely lacking though is any real sense of actual threat, you just know that there’s no way in which the machines will win this round because we’ve already met some of these characters in later life in earlier films… if you follow me?

Having said that this fourth Terminator film is more fun and generally more watchable than the lacklustre part three. I’ve no doubt that the terminators will “be back” for a further tale of man vs machine smack down but it’s probably too much to hope that they can reignite the excitement levels of the first two which are bona-fide classics.

Not convinced? check out this mini review of the film over at Tom Wade's Emporium of Man Love:

“Big explosions – bleak backdrop – meh storyline – Christian Bale doing the Batman voice and being a bit bland – seeing Arnold in CGI – lots of chases – directed by a man called McG – I can’t forgive him that."
Posted by Matt Adcock at 9:57 pm

Email ThisBlogThis!Share to TwitterShare to FacebookShare to Pinterest
Labels: McG, not as good as should have been, salvation, Terminator