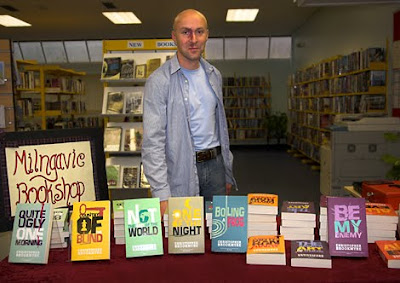 "Ohhh - these look good, I wonder what talented individual wrote them?"
The Darkmatters Top 5 Christopher Brookmyre Novels I love reading – I’ll read pretty much anything but when given the choice, I’ll pick caustic, dark, violent fiction – preferably with a biting wit which will illicit some spontaneous laughter. To that end I’d list my current favourite authors as: Iain Banks (also as Iain M Banks) Irvine Welsh
Chuck Palahniuk
And of course - Christopher Brookmyre Each of these guys have world views somewhat different to my own, but each can sure put together cracking, compelling and wholly absorbing fiction that has granted me many hours of pure pleasure… I’ll get round to blogging about my top 5 Banks / Welsh / Palahniuk books at some point but having just finished reading ‘Attack of the Unsinkable Rubber Ducks’ I will kick off this literary top 5 series with the man Brookmyre… I discovered Brookmyre’s cool, funny and exciting tales when I bought his debut novel just because I liked the cover - Quite Ugly One Morning - back in ’97 and have been loving his work ever since. So without any further ado – here’s my top 5 favourite Brookmyre novels to date (please note that this list does not consider A Snowball in Hell or his latest Pandaemonium as I’m ‘pleasure delaying’ the reading of those and they might well break into this top 5 five at a future date). All of these 5 I rate as ‘Classic’ status 10/10 scores… 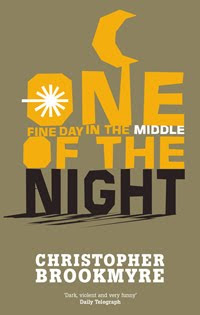 1. One Fine Day in the Middle of the Night The official promo blurb reads:
The occasion: high school reunion. The place: an oil rig converted into a tourist resort. The outcome: carnage. Gavin is creating a unique ‘holiday experience’; every facility any tourist who hates abroad will ever want will all be available on a converted North Sea oil rig. To test the facilities he’s hosting a reunion for his old school (none of his ex-classmates can remember him, but what the heck, it’s free). He is so busy showing off that he doesn’t notice that another group have invited themselves along – a collection of terrorist mercenaries who are occasionally of more danger to themselves than to the public. And they in turn are unaware that Inspector MacGregor has got wind of their activities. Within twenty-four hours Gavin’s dream has blown to the four winds, along with a lot of other things.
Dress Casual. Bring your own bullets.
- For me this is pretty much the perfect novel, as a massive fan of Die Hard and other action movies that Brookmyre riffs here... If only they's make a film!! 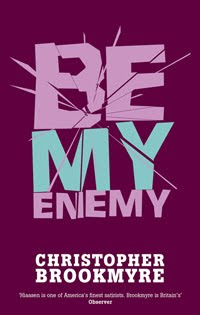 2. Be My Enemy The official promo blurb reads:
F**k this for a game of soldiers… For investigative journalist Jack Parlabane, these are worrying times: it’s been almost three years since anyone tried to kill him and he fears he’s losing his touch. But then comes an assignment in the Scottish countryside that will more than make up for lost time … Ultimate Motivational Leisure offer the latest in corporate outwards bounds courses, the sort of team building exercises that Jack thinks are decidedly for bankers. The organisers, however, are keen to overturn his prejudices, while Jack is happy to have them reinforced. If nothing else, he gets a free weekend of shooting at PR people with a paintball gun. Except the longer the weekend goes on, the weirder things start to get. First someone steals the SIM cards from everybody’s mobile phones. Then, when the group accidentally stray onto army land, the army start firing back – and not with cans of Dulux. Suddenly no one can tell what’s real and what isn’t, whether this is part of the game, or if everybody is fighting for their lives …
- Another genius action heavy romp that includes the best cannibalism scene ever! 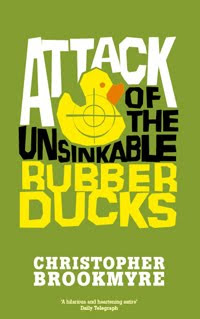 3. Attack of the Unsinkable Rubber Ducks
The official promo blurb reads:
Do you believe in ghosts? Do we really live on in some conscious form after we die, and is that form capable of communicating with the world of the living? Aye, right. That was Jack Parlabane’s stance on the matter, anyway. But this was before he found himself in the more compromising position of being not only dead himself, but worse: dead with an exclusive still to file. From his position on high, Parlabane relates the events leading up to his demise, largely concerning the efforts of charismatic psychic Gabriel Lafayette to reconcile the scientific with the spiritual by submitting to controlled laboratory tests. Parlabane is brought in as an observer, due to his capacities as both a sceptic and an expert on deception, but he soon finds his certainties crumbling and his assumptions turned upside down as he encounters phenomena for which he can deduce no rational explanation. Perhaps, in a world in which he can find himself elected rector of an esteemed Scottish university, anything truly is possible. One thing he knows for certain, however: Death is not the end – it’s the ultimate undercover assignment.
- This is a great read as Brookmyre rips into not just nutters of the occult variety but lumps in the scary fundamentalist religious ones too... 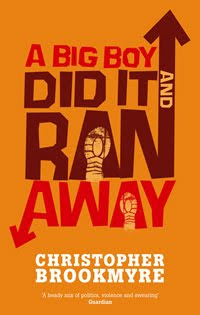 4. A Big Boy Did It and Ran Away
The official promo blurb reads:
Real Life™ blows. Just ask Raymond Ash. As a student, he and his friend Simon thought their futures would be paved with gold discs, gigs and groupies. Instead he’s found himself in his thirties, a nervous new father and an even more nervous new English teacher, facing the fact that responsibility has no escape key. Small wonder that he takes refuge living a virtual existence online. Everybody has to find their own way of coping. For some it’s affairs, for others it’s the bottle, while for his old mate Simon, it’s serial murder, mass slaughter and professional assassination. It’s a lifestyle not a million miles from those rock-star dreams: international travel, seven-figure pay cheques, adrenalin rushes and, of course, world-wide notoriety. Simon may have sucked as a lead singer, but as ‘the Black Spirit’ he’s number one with a bullet. More hits than Lennon and McCartney. A performer guaranteed to blow you away. The last thing on Ray’s troubled mind is a band reunion. For one thing, theirs wasn’t exactly an amicable split, but a slightly larger obstacle is that Simon has been dead for three years. So when Ray glimpses him walking through Glasgow Airport, he assumes he’s seeing things, until Real Life™ starts getting weirder and more violent than any computer game…
- I've played and loved many a computer game in my life, so this novel that transposes modern day action with computer game imagery and plot points made me smile for days... 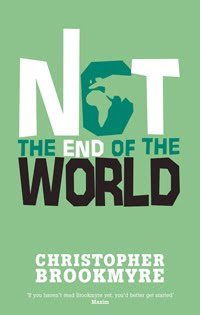 5. Not the End of the World
The official promo blurb reads:
The crew of an oceanic research vessel goes missing in the Pacific along with their mini-submarine. An evangelical media star holds a rally next door to a convention in LA devoted to ‘nubile’ cinematic entertainment. The cops know there’s going to be trouble and they are not disappointed. What they didn’t foresee was the presence in their state of a Glaswegian photographer with an indecipherable accent and a strong dislike of hypocrisy or of a terrorist who seems to have access to plutonium as well as Semtex.
- Porn meets religious nuts with a large does of terrorism, crackles with wicked thoughts and reads like a blockbuster screen play...
Full list of Brookmyre's books: Quite Ugly One Morning, 1996
Country of the Blind, 1997
Not the End of the World, 1998
One Fine Day in the Middle of the Night, 1999
Boiling a Frog, 2000
A Big Boy did it and Ran Away, 2001
The Sacred Art of Stealing, 2003
Be My Enemy (Or F**k This For a Game of Soldiers), 2004
All Fun and Games until Somebody Loses an Eye, 2005
A Tale Etched in Blood and Hard Black Pencil, 2006
The Attack of the Unsinkable Rubber Ducks, 2007
A Snowball In Hell, 2008
Pandaemonium, 2009
Posted by Matt Adcock at 5:29 pm

I picked up 'Quite Ugly....." in Glasgow on fine day. Back in those days I read just about anything and would buy on back cover pretty much alone - a marketing woman's dream. The book was highlighted as having just won a local (Scottish), new author award, so into the bag.

It was brilliant!! Everyone I knew read it and I've not met anyone since who has read it and not loved it. I have bought every book since as soon as I've seen it.

It killed me when I saw my English wife rolling on the floor whilst reading "A Big Boy...." - "What does that mean?" - classic venacular.

Some have been brilliant, some slightly less so but still well worth reading.
I genuinely like the new stuff but whilst typing this note have began to feel all nostalgic for those earlier days.