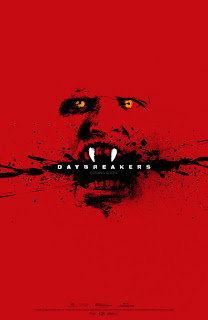 Welcome to a bleak near future… In under ten years – 2019 to be exact - a plague will have transformed pretty much every human into a vampire. Good news for Twilight fans perhaps but not for anyone with an once of pride in humanity.

Not everyone is thrilled about their new blood sucking lifestyle, especially blood specialist Edward Dalton (Ethan Hawke), who is working on a blood alternative for vampires to drink. This is an urgent task as nearly all the humans left alive have been rounded up and enslaved in massive ‘Matrix’ like farms where their blood is harvested and sold on.

The nasty vampire CEO of this blood channelling operation is Charles Bromley (Sam Neill) who has a heavily armed private army commissioned to hunt down and capture any rogue humans still at large. One of most loyal soldiers is Edward’s brother Frankie (Michael Dorman) who takes relish in tracking down humans and turning them in.

As the human blood supply dwindles, a terrible side effect of blood withdrawal begins to kick in on those vamps not rich enough to afford their shot of human life juice which is rationed in ‘coffee’. Blood deprivation you see causes vampires to regress into bat-winged mutant creatures that attack indiscriminately and pose a threat to whole civilised vampire society.

Step into the fray the last human resistance under the leadership of Lionel 'Elvis' Cormac (Willem Dafoe) – their ‘cure’ for vampires is to blow them away with crossbow stake guns.

Daybreakers really wants to be a hip cross between The Matrix and Underworld but alas the action on offer is fairly timid and predictable fare. Sure the vampires explode with startling gore soaked flashes but there is nothing groundbreaking here. The only thing that really impressed were the cool vampire friendly cars fitted with darkened windows and cameras that allow the creatures of the night to drive around in the sunlight.

Unfortunately directors The Sprierig Brothers fumble what could have been a great new action franchise and botch the climax so badly that when the door if very obviously left open for a sequel – it is the scariest moment of the film.

Daybreakers might look the part and delivers some ok vampire sci-fi action in places but the total is less than the sum of its parts. It’s never a good sign when one of the trailers before a film is much much more exciting than the main feature – the trailer in question was for ‘The Book of Eli’…

Denzel Washington bursts in and takes out both the vampires and the bumbling heroes - smiling his smug smile in the knowledge that his Book of Eli is much better than this mess. 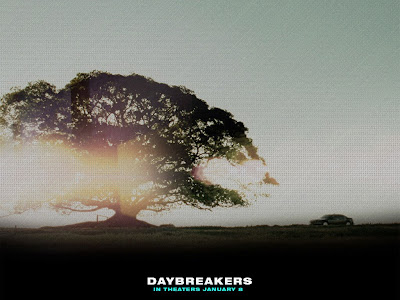 "The cars are the stars!"